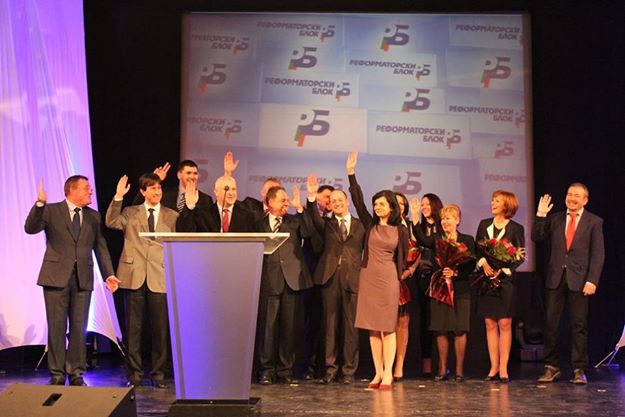 The Reformist Bloc sees the best possible government for Bulgaria as a centre-right coalition and sees the nationalist Patriotic Front as an acceptable partner in such a coalition, according to the bloc’s Naiden Zelenogorski.

He was speaking after a meeting of the bloc’s parliamentary group on October 22, which took place a day after Reformist Bloc leaders held a meeting of more than two hours with GERB leader Boiko Borissov and negotiators from Borissov’s party.

GERB, winner of the most seats in the newly-elected 43rd National Assembly, is seeking to get a coalition government into place with as broad as possible support in the new Parliament.

Three other parties in the new Parliament – the Movement for Rights and Freedoms, Bulgaria Without Censorship and ultra-nationalist Ataka – have been eliminated from consideration by GERB as possible partners.

In the new Parliament, GERB has 84 seats, the Reformist Bloc 23 and the Patriotic Front 19. That adds up to 126 out of the National Assembly’s 240 seats.

Korman Ismailov, leader of a Reformist Bloc constituent party that had been outspoken against co-operation with a party such as the Patriotic Front, seeing it as xenophobic and ultra-nationalist, indicated that there would be talks with the Patriotic Front.

“We will do our best to get a guarantee to achieve a stable pro-European, pro-Euro-Atlantic majority,” Ismailov said.

As to Purvanov’s ABC, which will have 11 seats, Zelenogorski said that there would be no problem provided that ABC supported certain policies “but for us a coalition should be a centre-right one”.

Bozhidar Lukarski, leader of the Union of Democratic Forces, also a constituent party of the Reformist Bloc, predicted that there could be a government by the end of next week.

After the talks between Reformist Bloc and GERB leaders on the night of October 21, GERB negotiator Roumyana Buchvarova said that the two sides had clarified their positions to each other and said that talks would continue at “expert” level.

Radan Kanev, leader of the Democrats for a Strong Bulgaria, another Reformist Bloc constitutent party, said that progress had been achieved but the bloc would await the outcome of GERB’s consultations with other parties and coalitions.

On October 22, GERB and the BSP were in communication discussing a meeting.

With the National Assembly scheduled to hold its first meeting on Monday October 27 at 2pm, Borissov has said that he wants to be able to report back to the GERB national council at 11am that day on the outcome of second-round talks on a government.