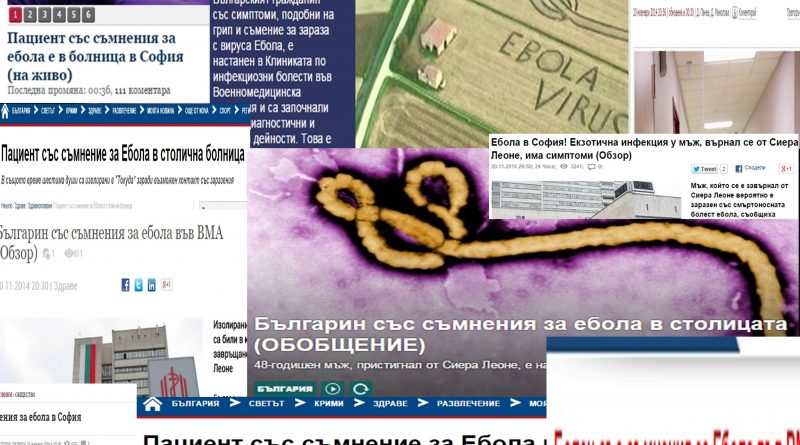 The shrill panic-inducing performance of some US cable television media in covering, or rather creating, the Ebola scare appears to have taught their Bulgarian colleagues nothing.

News on November 20 that a man with “Ebola-like symptoms” who first had been treated at a private hospital in Sofia and then admitted to an isolation ward at the Military Medical Academy unleashed a flurry of live crossings, live blogs and livewire headlines, such as one on one of the country’s most-read Bulgarian-language websites: “Ebola in Sofia!”

It is a required ritual of the 24-hour news cycle that reporters must type and talk as fast as they can, to relate clearly to the public that they have no real idea what is going on.

One website helpfully added to its coverage advice to readers how to avoid getting Ebola, illustrating this with a photo of a man in a hazmat suit.

Fortunately too, the Health Ministry was fairly swift in putting out sober and factual accounts. Two updates were posted on its website in the course of the evening, while senior officials including recently-appointed Health Minister Petar Moskov made statements seeking to bring down temperatures, with another official pointing out that Bulgaria had taken precautions exceeding those required by European health care protocols.

By 11pm, public broadcaster Bulgarian National Television, four hours after the first excitable broadcast on another channel, was reporting sources as saying that tests showed that it was extremely improbable that the patient had Ebola.

However, with one site reporting that the official outcome of tests would be available only at about 3am, and in spite of the Health Ministry long since having said that chances that the illness was Ebola were scant, many Bulgarian-language websites simply left their somewhat alarmist headlines and coverage in place – and knocked off for the night, presumably going to bed; perhaps, if they believed their own coverage, wearing hazmat suits.

The morning of November 21 found BNT, among the first to update its site (early-morning television generally has the function of producing early-morning website updates; other journalists were still in bed, or perhaps cowering underneath it), with the flat statement: “There is no Ebola in Bulgaria”.

Neither the patient nor those rounded up because they had been in contact with him tested positive for the illnesss.

Health Minister Moskov said that the case had shown, at least, that Bulgaria was prepared to respond adequately to a threat of deadly infection.

He said that there was a need for a mass information campaign.

In turn, Professor Todor Kantardzhiev, head of the National Centre for Infectious Diseases, responded to a journalist’s question that there was no need to conduct further tests internationally when the sample had proved negative.

The background to this was a report on one Bulgarian-language website saying that material would have to come from Germany to make tests possible, and this – according to the report, which was unsourced – would take at least two days.

“There is no one infected by Ebola in Bulgaria. The situation that raised suspicions of someone ill with Ebola in this country was a stress test, which proved that Bulgaria was ready to meet this challenge,” Moskov said.

To help public awareness about the disease, there would be an information campaign directed towards entry points to the country and those travelling to countries where the illness has occured, he said. A telephone line would be opened to enable people to report suspected cases of Ebola.

Moskov said that an overreaction was better than allowing the possibility of the infection spreading. But he was referring to the measures taken by health authorities on the night of November 20.

* For the record, the patient was – after tests – diagnosed as having malaria.