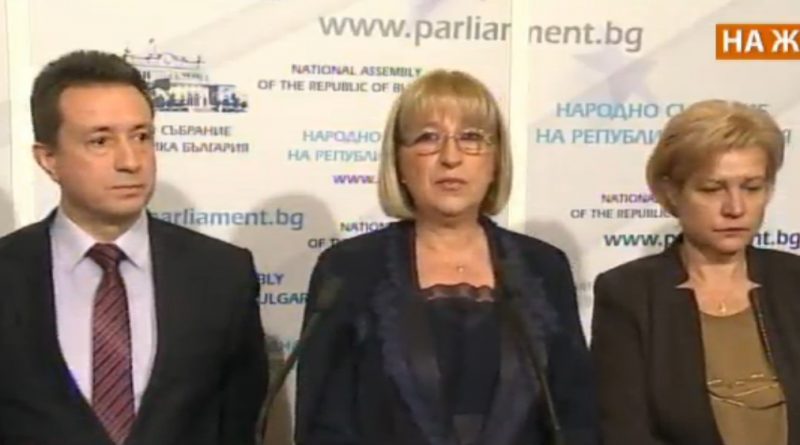 Four hours of talks between negotiating teams from GERB and the Bulgarian Socialist Party established common ground on some policy areas but crucial differences on most.

The talks were the first in a series being held at the initiative of GERB, winner of the most votes in the October 5 parliamentary elections, with all parties that won seats in the next National Assembly.

Ahead of the talks with the BSP, which ran a distant second in the elections, GERB already had ruled out a coalition government involving the BSP and the Movement for Rights and Freedoms.

The head of the three-member GERB negotiating team, Tsetska Tsacheva said that the purpose of the meeting had been to see where the two parties had common ground.

The talks worked through the 18 priorities outlined in GERB’s election platform.

GERB negotiator Menda Stoyanova said that there were irreconciliable differences between the two parties on eight of the 18 GERB priorities.

Stoyanova said that there were matching views in some areas.

These were the Euro-Atlantic orientation of Bulgaria and compliance with commitments in international treaties, improving the business environment and investment promotion, Bulgaria’s entry into the European banking union, and the creation of a single European Energy Union. Another priority was the restore the European Commission’s confidence in Bulgaria and reimbursements of funds in European programmes.

Stoyanova said that in two areas, there were common ground in principle but important differences about implementation. These were Corporate Commercial Bank, and infrastructure projects, she said.

The BSP wanted the new government to immediately address the issue of Corpbank and the reimbursement of depositors. GERB wanted the same, but believed that it was in the interest of the Bulgarian economy and the entire nation that a real solution should be achieved only on the basis of a comprehensive analysis of the data.

GERB wanted central Bulgarian National Bank to appoint an internationally recognised consultant to propose, on the basis of the data, ways out of the situation – as well as an analysis on how much each would cost the state and the Bulgarian economy as a whole.

The other area where there was agreement on the principle but differences on the approach to implementation was infrastructure.

Other areas of difference included tax policy, the energy sector, the security sector, education, health care and pension reform.
Stoyanova said that further talks with the BSP would be very difficult if the BSP did not depart from what that party called its “red lines”.

BSP chief negotiator Yanaki Stoilov said that the talks with GERB had been constructive and well-intentioned.

He said that for the BSP, achieving stability – political, financial and social – in the country was important, and new elections were not the answer.

GERB intends to hold talks on consecutive days with all parties that will have seats in the 43rd National Assembly, with the next meeting scheduled to be with the Movement for Rights and Freedoms on October 14.

Meanwhile, within the Reformist Bloc – for which relations with a possible GERB government has been a particularly difficult issue – there was a further development on the coalition issue front on October 13 when Meglena Kouneva’s Bulgaria for Citizens, a bloc constituent party, said it would hold an internal referendum on the attitude of party members to participation in the future government.

This consultation was promised during the election campaign, Kouneva’s party said.

The referendum will be held from October 14 to 17 on a specially-created online platform accessible only to members of the party who will receive a unique number to access the voting system. The party’s executive council said that it would announce the results at the end of the week.

GERB’s first-round talks with the Reformist Bloc are expected to be held on October 15.