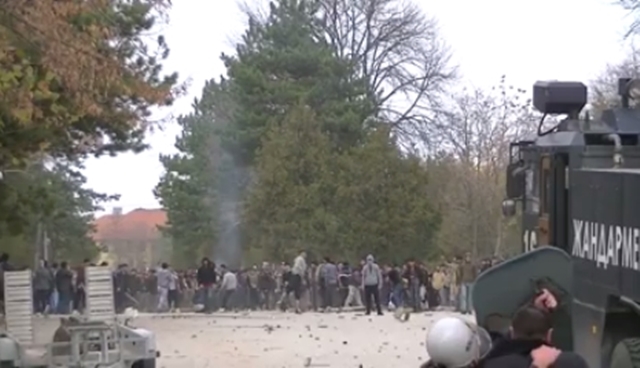 The violent clashes between people locked down in Bulgaria’s Harmanli refugee centre and police prompted a political storm, with Parliament’s largest party urging others not to use inflammatory rhetoric while nationalist anti-migrant parties called for the building of gated camps and blamed the situation on Ankara.

The November 24 confrontation at Harmanli, about 250km from capital city Sofia, resulted in hundreds of arrests and in 24 riot police being slightly injured.

The clashes appeared to be the result of those accommodated at Harmanli trying to leave it, to head to the Serbian border and on to Western Europe, in spite of the camp being quarantined because of an outbreak of skin diseases.

The events at Harmanli coincided with other developments, including the threat by Turkish president Recep Tayyip Erdogan that he would let hundreds of thousands of migrants through into Europe if pushed by the EU. Erdogan issued the threat in reaction to a non-binding vote by the European Parliament to freeze talks on EU membership for Turkey, the BBC reported.

Coincidentally too, on November 25 the interior ministers of Bulgaria, Turkey and Greece were to meet at the Kapitan Andreevo border checkpoint for the official opening of a new tripartite contact centre for police and customs co-operation.

And also on November 25, the trial began of Petar “Feathers” Nizamov, who became well-known earlier this year after he and others were filmed binding three Afghanistan refugees with plastic packing ties after capturing the three near the Bulgarian border with Turkey.

Nizamov, if found guilty, could face up to six years in prison for illegally capturing the three Afghans. He and other participants in so-called “civic patrols” to capture refugees have claimed that they were carrying out “citizens’ arrests” – though no such concept exists in Bulgarian law.

Nizamov described to reporters his trial as an “irony” and said that after his November 25 hearing, he would be going to Harmanli.

In Parliament, Interior Minister Roumyana Buchvarova said that those involved in the rioting at the Harmanli refugee centre were being investigated by the State Agency for National Security to establish whether any had ties to radical Islamist groups.

Tsvetan Tsvetanov, head of the parliamentary group of Boiko Borissov’s GERB party, said that the government had made every effort to keep tensions in Harmanli under control.

Responding to criticism from the opposition Bulgarian Socialist Party, Tsvetanov said that were they in government, the problems would be many times worse and would remain unsolvable for years to come.

BSP leader Kornelia Ninova called on the government to take immediate steps, including immediate deportation of those who were not refugees from war, for the army and border police to take “Draconian” measures against illegal crossings and people-smuggling and for accelerated construction of the fence at the Turkish border, “if you permit me, without stealing the money”.

The centre-right Reformist Bloc called for decisive intervention by the state in response to the riots in Harmanli.

Reformist Bloc parliamentary group head Naiden Zelenogorski said that the Interior Ministry’s intervention in the situation at Harmanli had been adequate. He called for hearings by the committees on internal security and public order and defence of the State Agency for Refugees and the State Agency for National Security “so that we can be sure that there is a plan to prevent similar outrages in other places in Bulgaria”.

The nationalist Patriotic Front and Volen Siderov’s Ataka groups criticised the Interior Ministry over the situation in Harmanli.

“Following the decision by the European Parliament to freeze the negotiation process with Turkey, these processes are orchestrated by the authoritarian regime of Erdogan in Turkey,” Karakachanov said.

Buchvarova, speaking to reporters in the Parliament building, said that it was not possible to comply with the request of those in Harmanli to be provided a passage to the Serbian border.

It was politically impossible for this to happen, she said.

“There are rules and these citizens of Afghanistan, who have come to our territory illegally, should know that we are ready to assist them at a humanitarian level, to ensure fair procedures, but they are obliged to comply with and respect Bulgarian law,” Buchvarova said.

A European Commission spokesperson said that responsibility for the management of reception centres lay with the national authorities.

“We understand that the situation is under control. The EU has provided many resources, money and mechanisms in support of the Bulgarian authorities,” the spokesperson said.

“The general principle is that everyone who is eligible receives protection,” he said. Other migrants who had no basis for applying for the right to stay should be returned, the spokesperson said.

On November 23, in a regular report, the International Organization for Migration said that a total of 260 migrants and refugees had arrived in Bulgaria from November 10 to 16, and 213 from November 17 to 23.

Since the beginning of 2016, the largest groups of refugees and migrants arriving in Bulgaria were from Afghanistan, Iraq, Syria and Pakistan, the IOM said.