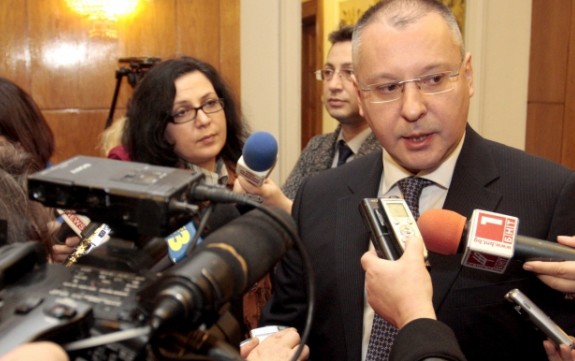 Bulgarian Socialist Party leader Sergei Stanishev said that he would approach the Prosecutor-General after receiving allegations that there had been illegal electronic surveillance, at the orders of then-interior minister Tsvetan Tsvetanov, of a range of government and opposition politicians, business people, members of the judiciary, protest leaders and other public figures including Bulgaria’s European Commissioner.

Stanishev, a former prime minister who hopes to see his party return to power in Bulgaria’s May 12 ahead-of-term elections, told a news conference on March 29 2013 that he had received the allegations at his official e-mail address.

Tsvetanov was interior minister in Boiko Borissov’s centre-right government from July 2009 until Borissov’s resignation as prime minister and the appointment of a caretaker cabinet in March 2013. Tsvetanov is heading the election campaign of Borissov’s party, GERB.

Stanishev, also leader of the Party of European Socialists, said that if the allegations of illegal eavesdropping turned out to be true, “then we have a monstrous scandal, which will go beyond Bulgaria’s borders”.

He said that those who had been subjected to illegal surveillance included former president Georgi Purvanov, at the time that the then head of state launched his abortive ABV “civic movement”.

Current head of state, President Rossen Plevneliev – who came to office in January 2012 after election on a GERB ticket – had been the subject of illegal eavesdropping at the time that Plevneliev had been working on forming the current caretaker cabinet, Stanishev said.

Ahmed Dogan, current honorary president and long-time leader of the Movement for Rights and Freedoms, had been eavesdropped on while his involvement in the Tsankov Kamuk hydro project was being investigated, according to the socialist leader.

Others who had been tapped included former finance minister Simeon Dyankov, who quit Borissov’s government just before Borissov announced his resignation.

So had ultra-nationalist Ataka party leader Volen Siderov after Siderov fell out with the Borissov government, and so had minority right-wing Democrats for a Strong Bulgaria party leader Ivan Kostov after he criticised Tsvetanov, Stanishev said.

Bulgaria’s European Commissioner, Kristalina Georgieva, had been the subject of illegal surveillance during visits to Bulgaria. Stanishev said that the list of those illegally tapped included his own name, several times.

Also on the list, according to Stanishev, were Neli Kutskova, a former chairperson of the Bulgarian Judges Association; and business people Ivo Prokopiev, Grisha Ganchev, Tsvetelina Borislavova and Georgi Gergov. Prokopiev owns Bulgarian-language media outlets, Ganchev is a Lovetch-based business person with a number of interests including the Bulgarian manufacturing operation of Great Wall cars, Borislavova is arguably best-known as chief of Bulgarian-American Credit Bank and for having had a long-standing relationship with Borissov and Plovdiv-born Gergov business interests include the International Fair Plovdiv, Tsum and hospitality industry properties in Plovdiv.

A day earlier, Meglena Kouneva’s Bulgaria for Citizens party said that it was approaching Prosecutor-General Sotir Tsatsarov about alleged illegal eavesdropping on politicians and journalists.

Tsvetanov told public broadcaster Bulgarian National Television on March 28 that “parties that had nothing to offer the voters” were alleging that GERB was behind unlawful eavesdropping on politicians and journalists.

“Never in any way were the services used to track political opponents,” Tsvetanov said.

He said that such allegations were “ridiculous”.

Tsvetanov said that he had received a letter containing similar allegations a few months ago. He had referred the allegations to the commission in charge of oversight of the security services “and it is the institution that can answer those questions”.

The commission, however, currently is inoperative because Parliament was dissolved when the caretaker cabinet took office.