Bulgarian President Rossen Plevneliev said on March 28 he was “concerned” with the International Olympic Committee’s intention to drop wrestling from the list of “core sports” for the 2020 Summer Games.

“It should not be forgotten that wrestling is one of the oldest sports at the Games and has accumulated much authority and interest over the years,” Plevneliev said in a letter to Bulgaria’s national wrestling team and the country’s wrestling federation.

Bulgaria was among the countries that contributed to the sport’s prestige around the world, he said.

“Thanks to several golden generations of Bulgarian wrestlers, our country deservedly takes its place in the top 10 all-time medal table,” Plevneliev said. “This is why I categorically support all efforts towards keeping wrestling an Olympic sport and believe that such efforts will be successful.”

Bulgaria has won a total of 68 Olympic medals in wrestling (fifth overall in the all-time medal table), including 16 golds (ninth overall). It is also one of the few sports in which Bulgarian competitors enjoyed Olympic success in recent Games – wrestlers accounted for two silver medals and three bronzes (out of a total of seven medals) won by Bulgarian athletes at the Beijing and London Olympics.

Last month’s IOC announcement that wrestling was to be dropped from the list of core Olympic sports, competing for the last spot at the Olympics against several other sports, was met with shock by the world’s wrestling community, with Bulgaria being no different.

Two-time Olympic champion Armen Nazaryan, now the coach of Bulgaria’s Greco-Roman wrestling team, went on a hunger strike, saying he would not eat any food until the start of the (now-concluded) European championships in Georgia.

Valentin Yordanov, seven-time world champion and Olympic champion in Atlanta in 1996, was among the many former competitors who returned their medal in protest against IOC’s decision.

(The IOC ruling also accomplished the unimaginable – uniting the US and Iran, two countries with a decades-long history of clashing on numerous issues, in their efforts to bring wrestling back to the Olympics). 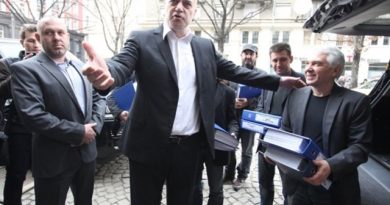