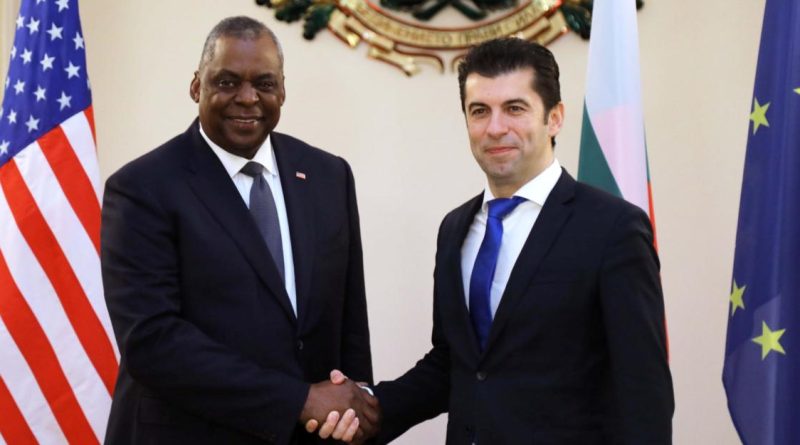 The United States will deploy a Stryker armoured vehicle company to the battle group that Bulgaria is forming, Prime Minister Kiril Petkov told a joint news conference in Sofia with visiting US Defence Secretary Lloyd Austin.

“This battle group will be under the command of Nato’s Supreme Allied Commander Europe, and we will propose that its commander be Bulgarian,” Petkov said.

He said that he and Austin had not discussed Bulgarian military support in Ukraine “in any way”.

“We are working together to strengthen the (Nato) Eastern Flank, but nothing else has been discussed on this topic,” Petkov said.

Bulgaria’s government has said that it is inviting Nato allies to participate in the battle group it is forming. Given that Bulgaria does not have modern armoured combat vehicles, the Stryker company will compensate for a deficit.

A US 2nd Cavalry Regiment Stryker company arrived in Bulgaria in February for joint training exercises.

Bulgaria’s government has said repeatedly that the battle group will not be deployed outside Bulgarian territory.

Austin told the news conference: “We had a very productive discussion on Russia’s unprovoked invasion of Ukraine. We also discussed important issues in the field of defence”.

“Our commitment to Article 5 (of the Washington Treaty) is unshakable. Putin’s invasion has claimed many lives in Ukraine. Russia’s aggression has united not only Ukraine, but also Nato and the free world,” Austin said.

He said that he welcomed everything that Bulgaria was doing to provide emergency humanitarian assistance to those affected by the war in Ukraine.

Petkov said that military aid to Ukraine would be possible only with the consent of Parliament.

Asked if there were any concerns that Russia could invade Moldova, Petkov said: “Moldova is a concern for us. They are not in Nato and they are a small country.

“Currently, more than five per cent of their population are Ukrainian refugees. Their export trade is currently reduced because the war in Ukraine does not allow that and they have a Russian presence in part of their country,” Petkov said.

“There is a large Bulgarian minority in Moldova, so its security is very important to us,” he said, expressing hope that its military security would continue in the same way.