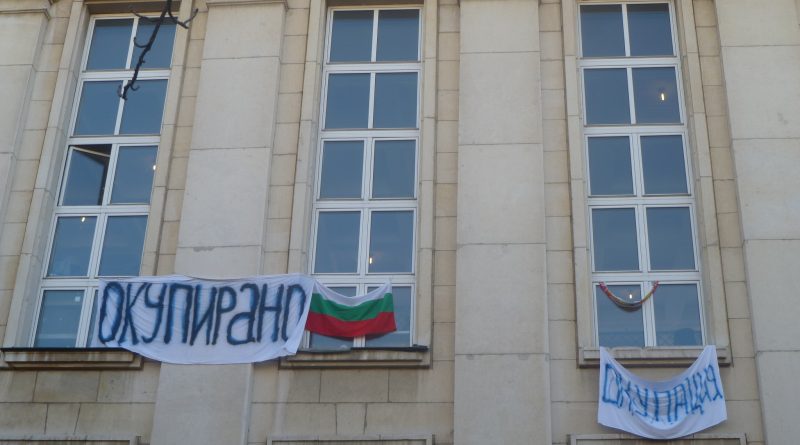 The academic council of Sofia University, where a group of anti-government protesters started a new occupation of the central campus buildings on January 25, has called on the university’s leadership to take “all legal measures” to end the occupation.

The protesters’ demands are similar to those during the previous occupation of the university, from October to mid-January – mainly, the resignation of the Bulgarian Socialist Party government, university rector Ivan Ilchev, and action against the grasp of organised crime on Bulgaria’s public life.

Ilchev described the occupation as a “crime”, saying that there was equipment worth hundreds of millions of leva in the university’s central campus buildings. He said that he would approach prosecutors about the occupation.

“Everything there is now left without control, without surveillance. This is a crime and is theft of state property,” he said.

The occupation was also opposed in a January 26 declaration by the university’s student council, which similarly rejected the earlier anti-government student protest occupation at Sofia University.

On January 26, participants in a regular DANSwithme anti-government protest expressed solidarity with the group of students occuping Sofia University, entering the building at their invitation, local media said.

Also backing the occupation were lecturers who earlier had backed the October occupation by the “Early Rising Students” group.

“We share their goals and values, we want morality and integrity in politics, the rule of law, the severing of ties between the political elite, oligarchs and organised crime,” the academics said. They said that this was why they continued to insist on the resignation of the current government, the dissolution of the 42nd National Assembly, fresh elections, civil control of all institutions and authorities and an end to the monopolisation of the media.

“We are fighting for the future of Bulgaria in the European Union and in the civilised world,” the academics’ declaration said.

The academics called on all parties to avoid violence and urged the university leadership to refrain from “rash actions”.

Local media reports said that the group of occupiers was from a wing of the earlier protesters who occupied the university and who had opposed the January 14 lifting of the occupation.

The protesters said that they needed citizens to patrol the streets around the university to prevent a recurrence of October 27, when a group of counter-protesters invaded the campus courtyard and tried to break down the doors to end the occupation.

Media reports said that a counter-protest was planned to be held on January 27 at the central campus of the university.