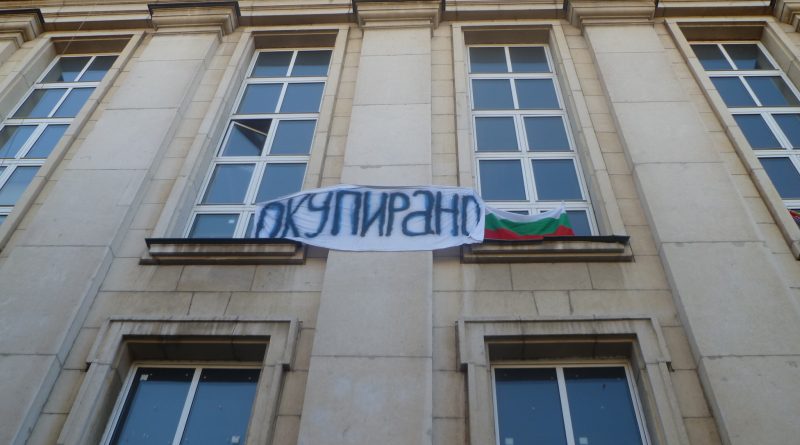 A group of students protesting against the Bulgarian government began a new occupation of Sofia University soon after midnight on January 25 2014, saying that the occupation was open-ended and would not be lifted until their demands were met.

The previous occupation of Sofia University was from October 13 2013 to January 14.

The protesters’ demands include the resignation of the current Bulgarian Socialist Party government, the dissolution of the 42nd National Assembly, early parliamentary elections to be held at the same time as Bulgaria’s European Parliament elections on May 25, the dismissal of Professor Dimitar Tokushev – law professor and member of the Constitutional Court – and the resignation of Sofia University rector Professor Ivan Ilchev.

Gates at the university were padlocked and the students said that neither examinations nor administrative work would be permitted.

The group is different from the “Early Rising Students” that initiated the October occupation of the university. Local media said that the group numbered about 30 people.

Local media said that Tokushev was seen outside the university at about 8am on January 25. He was there to oversee a scheduled examination in the history of Bulgarian law. Tokushev, one of the Constitutional Court judges who was in favour of the court’s ruling that Delyan Peevski was still a member of Parliament in spite of his short-lived election as head of the State Agency for National Security, declined to comment on the renewed occupation, reports said.

In the early hours of January 25, an attempt by vice-rector Roumen Pankov to persuade the students not to proceed with the occupaiton had failed, local media said.

At about 2am, a declaration by the occupying students was read out.

Referring to the previous occupation, the declaration said that “because of our lack of experience with the dishonest way of behaving by the criminals who hold the state, this occupation was neutralised, watered down and done away with. We realise that this should not be repeated”.

It said that a student declaration on November 16 had said that the occupation would be renewed if there were “provocations” against the student protesters.

The declaration said that Ilchev had failed to maintain academic autonomy when police illegally entered the university area, and compared to previous rectors and the background of events in Ukraine, when academic leaders had declared true solidarity with the justified protest of students, “we were left isolated and even pressured to abandon our actions”. It said that Tokushev had brought down the country’c constitution.

The declaration referred to a number of other issues, including the January 22 European Commission report, which the declaration said confirmed that Bulgaria could not continue to ignore simple morality and legality.

“The judiciary, political legitimacy and credibility of the institutions are practically ruined. We refuse to tolerate this.”

The government was continuing to commit the country to borrowing that had little social impact, according to the declaration.

Prosecutors concealed the money laundering by Hristo Biserov (the former deputy speaker of parliament from the Movement for Rights and Freedoms against whom charges in this regard were laid in 2013), instead showing him to the public only as a witness in other trials, the declaration said.

The declaration also referred to what it called the boorish actions of ultra-nationalist Ataka party leader Volen Siderov against a French diplomat and Bulgarian journalists, and to BSP MP Strahil Angelov’s illegitimate action in expressing support for the Assad regime in Syria, which was an embarrassment to Bulgaria.

It was absolutely unacceptable, the declaration said, that Peevski “illegally” held a seat in Parliament while conducting an information monopoly over the distribution of newspapers.

The declaration also cited what it called preparations for laying waste to natural resources through illegal construction in the Strandzha nature area.

At the same time, there was no solution or interest by the state on the issues of the tobacco workers or the refugee crisis.

“All of this shows the paralysis of the government, which is interested only in the promotion of Russian interests in the country.”

The declaration said that, as in the November declaration, the students were calling on Bulgarian citizens to conduct civil disobedience, boycotts of the authorities and effective protest, and called for support from other universities in the country.

Ilchev told public broadcaster Bulgarian National Television that the occupation involved no more than 10 people, most of whom were not Sofia University students. He condemned the action as blackmail and said that he would not resign.

He said that behind the action was someone who wanted to create tension. The protesters, Ilchev said, were like two-year-old children who stamped their feet and said, “I want!”

NSI: Quarter of foreign students in Bulgaria are from Greece