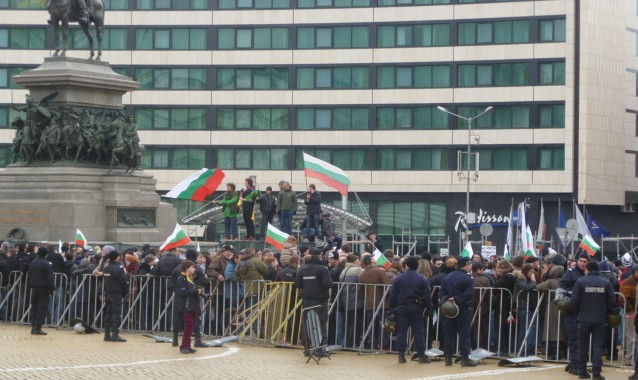 Tens of thousands of Bulgarians rallied in street protests in Sofia and several other cities and towns on February 24 2013 against monopolies and in a call for radical change to the country’s energy sector policy, with the huge turnout signalling that the resignation of the government has encouraged, rather than tamped down, demands for change.

The protests, scheduled several days ago, also followed two “round table” meetings the previous day involving diverse constituents of the protests, producing an even longer list of demands, far outstripping those of more than two weeks ago when the issue was high electricity bills.

Bulgaria is moving steadily towards the formation of a caretaker government and ahead-of-term parliamentary elections. But protesters are demanding the convening of a wider Grand National Assembly and far-reaching constitutional reforms.

By the mid-afternoon of February 24, the protests had passed off largely peacefully, in spite of dire warnings that large football fan groups had become involved and that there was a risk of violence being provoked.

In Sofia, protesters – estimated at more than 10 000 – joined in under the motto of the nationwide campaign “Let’s burn the monopolies”.

Outside Parliament, the crowd that took up the entire square joined in an emotional rendition of the national anthem, waving Bulgarian flags and banners reading “Every day like this until victory”, “New judiciary, parliament, constitution” and even “everyone out”.

A possible indication that the protests, while damaging for Boiko Borissov’s centre-right government that has now stepped down, may also not turn into electoral support for the opposition socialists, were signs saying “Stop Roumen Ovcharov and the energy mafia” and “Stop the red scenario”. Ovcharov was economy and energy minister in the 2005 to 2009 socialist-led tripartite government.

In another sign that politicians as a whole are not being well received by Bulgarian crowds, the reception given to President Rossen Plevneliev, who appeared at the protest at the invitation of some of the organisers, was given a largely hostile reception and kept his remarks short.

Nonetheless, Plevneliev kept his message to the protesters positive, inviting them to work with him “on what is really important for the country”.

On February 23, the President’s office announced that he had called a special meeting of the Consultative Council on National Security for February 26, to discuss “risks and threats for the security and stability in the country, resulting from the political and social crisis”.

On February 25, he is to offer GERB a mandate to form a government, although GERB has said that it will turn down the offer. The offering of mandates is part of a procedure specified in the constitution before a caretaker government must be appointed by the President if a second and third party also refuse – as these two parties, in order of size, the Bulgarian Socialist Party and the Movement for Rights and Freedoms, have indicated they will do.

Demands
The protestors’ organisational committees from 25 Bulgarian cities released their joint demands at a national meeting in the southern town of Sliven on February 23, local news agency Focus said.

The demands were be read out on February 24 to the protestors and would be co-ordinated with them. After that they will be submitted with the President’s Office.

The protestors’ representatives announced the demands: for the current Parliament to continue working; establishment of a programnme cabinet; establishment of public council of experts and a compulsory civil quota of 50 per cent; an agreement between the public council and programme cabinet about the fulfillment of citizens’ demands; amendment to the election law; transition from the current proportional representation system to a majority election system; possibility to recall MPs and for civil quotas in all state regulatory bodies; cancellation of article 69 and article 103 of the Constitution.

Regarding monopolies, the protestors insist on: immediately terminating all court actions against subscribers of power distribution companies, district heating companies and water and sewerage companies until the legitimacy of utility bills is established; a decrease in the quotas for the production of expensive electricity; using 100 per cent of the cheap electricity generated by Kozloduy nuclear power plant to meet the needs of the domestic market; the state’s managing the power distribution companies in compliance with the European norms and directives; removing all mediators and giving the National Electricity Company (NEK) their duties; declassifying all contracts of the producers of electricity for the domestic market; terminating the contracts robbing the state and Bulgarian citizens; holding the people who signed the contracts liable for the damages the state is suffering; partisan management and a 50 per cent civil quota in the State Energy and Water Regulatory Commission.

As to district heating companies in Bulgaria, the protestors demand: individual contracts with the companies, with each subscriber having the right to terminate their contract with one month’s notice; an individual device for measuring the actually used heating so that the actual consumption is known at any time; removal of the term “predicted amount”; monthly reading of heat meters; removal of companies for heating accounting; termination of all concession contracts about water supply and the state’s getting the functions of the concession companies.

On February 23, the leaderships of the Bulgarian Chamber of Commerce (BCC), the Confederation of Independent Trade Unions in Bulgaria (CITUB) and the Podkrepa Labour Confederation called on civil society and Bulgaria’s politicians to form a caretaker government and conduct elections for a Grand National Assembly as soon as possible, news agency BTA said. 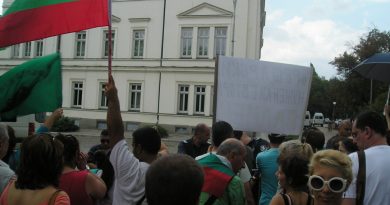