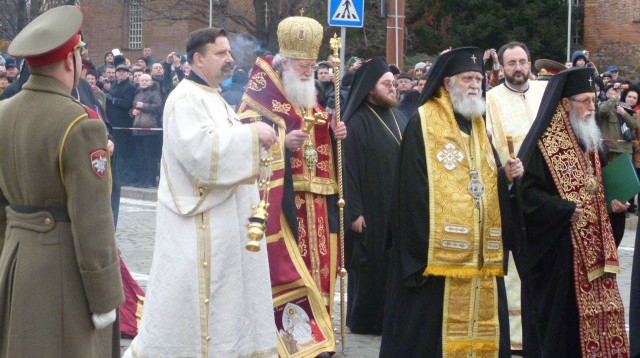 The newly-elected Patriarch of the Bulgarian Orthodox Church, Neofit, offered a public prayer at his enthronement ceremony at Sofia’s Alexander Nevsky cathedral for the unity of the nation, a plea made on a day that several thousand Bulgarians countrywide turned out in street protests demanding wide-ranging reforms amid the country’s political and social crisis.

Neofit (67), until his election the Metropolitan of Rousse, defeated Metropolitan Gavil of Lovetch in a second-round victory on February 24 2013. The runoff was required after the 138-member electoral college of clergy and laity did not give him an absolute majority of votes in the first round. The electoral college was meant to have 142 members but four were absent on the day, as was the candidate vanquished in the first round, Galaktion, who had pneumonia.

Neofit succeeds Patriarch Maxim, who died on November 6 2012 aged 98, having headed the church since 1971.

The holding of a second round of voting put proceedings two hours behind schedule. A small crowd of Orthodox Christian faithful who stood behind police tape across the road from the Holy Synod headquarters greeted with applause the pealing of Alexander Nevsky’s cathedral bells that hailed the election result.

Metropolitan Joseph, spokesman on the electoral process, emerged from the Holy Synod to read the formal announcement, smilingly signalling for the bells to be silenced temporarily before booming out the winner’s name as “Ne-o-fit!”

Not only is Bulgaria in crisis, but Neofit also inherits the chairmanship of the Holy Synod at a time that the Bulgarian Orthodox Church faces serious challenges.

It has been wracked with controversies, including the row over the appointment of Archons, meaning the bestowing of an ancient title – until a few years ago, generally considered obsolete – on lay people whose reputations are the subject of public discussion.

Another controversy dates back more than year, after the Dossier Commission identified the majority of members of the Holy Synod as having worked for Bulgaria’s communist-era secret service, State Security. Among those named was Neofit himself. His defeated rival, Gavril, was the only metropolitan among those eligible for election who had not worked for State Security.

It remains unclear how much the new Patriarch would be able to achieve, because the internal dynamics of the Bulgarian Orthodox Church are that it is the Holy Synod and some individual metropolitans are genuinely powerful while the Patriarch is a “first-among-equals” figure lent scant formal power by the church’s statutes and by church practice.

Neofit was born Simeon Dimitrov on October 15 1945 in Sofia. He was educated in Sofia and Moscow and in 1975 became a monk at the Troyan Monastery. He was rector of the Theological Academy, later Secretary of the Holy Synod and became Metropolitan of Rousse in 2004.

Bulgaria’s Dossier Commission, the body charged with investigating public figures’ connections with State Security, identified Neofit as having been Agent Simeonov, recruited in 1983. At the time that his connection to State Security was identified, Neofit said that he felt no guilt about complying with something that had been a requirement when travelling outside the country. State Security had been interested in conferences and meetings abroad and after his return from abroad, what had happened and what meetings there had been. This in no way prejudiced those with whom meetings and conversations had been held, he said, Bulgarian news agency BTA reported at the time.