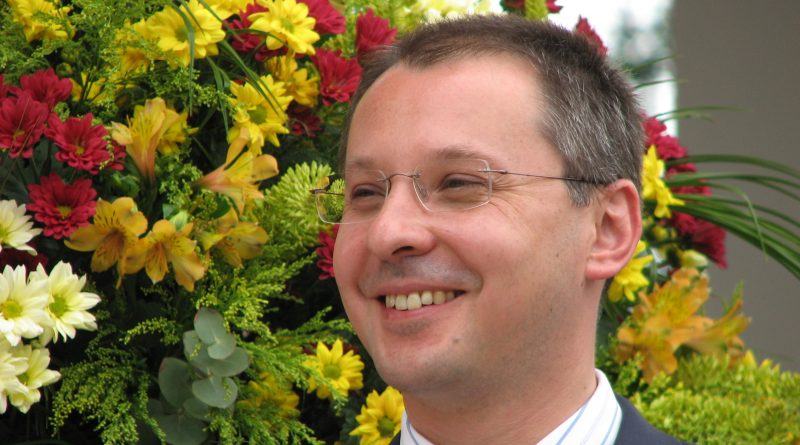 Bulgarian Socialist Party leader Sergei Stanishev, elected on September 29 2012 as president of the Party of European Socialists, said on his return to Sofia that a “leftist wave” was coming to Europe – citing as his proof the outcome of recent elections in France and Slovakia.

Stanishev, who became Bulgarian Socialist Party leader at the end of 2001 and was prime minister in a socialist-led tripartite government in Bulgaria from 2005 to 2009, was welcomed to the Bulgarian capital with bouquets and applause by socialist supporters.

The socialist leader, who earlier in 2012 defeated a local leadership challenge by his predecessor as BSP chief, Georgi Purvanov, said that it was “great” that a Bulgarian was now at the head of what he called the great European family of European social democrats, which he said was gaining in strength.

European socialists were on the comeback trail, according to Stanishev.

“There is a need for a change in Europe,” said Stanishev, a 46-year-old Ukrainian-born graduate in history from Moscow State University.

“The policy that is being conducted everywhere where the Right is in power is just killing the European idea and crushing people, because of the impact of the crisis on them,” he said.

He was sardonic about the current centre-right government in Bulgaria, which defeated his party in 2009 parliamentary elections.

The right-wing in Bulgaria had showed that they could not do a good job for Bulgaria, failing in the country’s bid to join the European Union’s Schengen visa zone, Stanishev said.

He said that under the current GERB government, Bulgaria had become a second-class team “on the backbench” with a government unable to provide to Bulgarians the reality of the European dream.

Stanishev, elected with about 91 per cent  support at the Party of European Socialists congress on September 29, said that his support from all parties in the European socialist family was a clear demonstration of the assessment of his term of office as prime minister of Bulgaria.

He said that the fact that Bulgariahad not been admitted to Schengen was proof that Europe had lost confidence in the country.

Stanishev, who told journalists at Sofia Airport that he would hold on to his post as Bulgarian Socialist Party leader – and therefore would lead the party into Bulgaria’s scheduled parliamentary elections in summer 2013 – said that one of his tasks as president of the Party of European Socialists would be to “make it possible for people to vote freely, to see that their vote has weight and that it will not be stolen or replaced”.

He said that the most recent report on Bulgaria by the European Commission had come to “very severe” conclusions about the country’s judicial system, its inability to observe the fundamental principles of the division of powers, and that, “in general, we have a problem with the application of democratic standards,” Stanishev said.

A media statement by the Party of European Socialists said that the election of Sergei Dmitrievich Stanishev as the President of the PES was received with a standing ovation from the audience.

Stanishev thanked the PES congress for the confidence placed in him, underlining that; “our values are our strength. If we want to change the direction of Europe away from austerity and short-sighted politics, if we want to get out of the crisis together, we must set the example both inside and outside our political family. This is the reason why democracy and solidarity are the essence of the PES Congress – because they are at the very core of being progressive and of being European”.

Stanishev said: “This congress shows that we are a unified party. Our major goal is to give back hope to the European citizens, to restore the confidence that the European project is the path for a better future. People here believe that an alternative to austerity is not only possible but necessary. We have taken big steps on economic policy, on social policy and on democracy. On economic policy, we have pushed for movement on Financial Transaction Tax, on regulation of credit rating agencies, on a genuine banking union and on Eurobonds. On social policy, we are calling for a social pact, so that people can believe that Europe is about them, and on democracy we have set in stone our plans for a democratic common candidate”.

Opinion polls in Bulgaria from 2009 to the most recent in 2012 suggest that in next summer’s elections, Stanishev’s party will gain the second-largest share of votes.