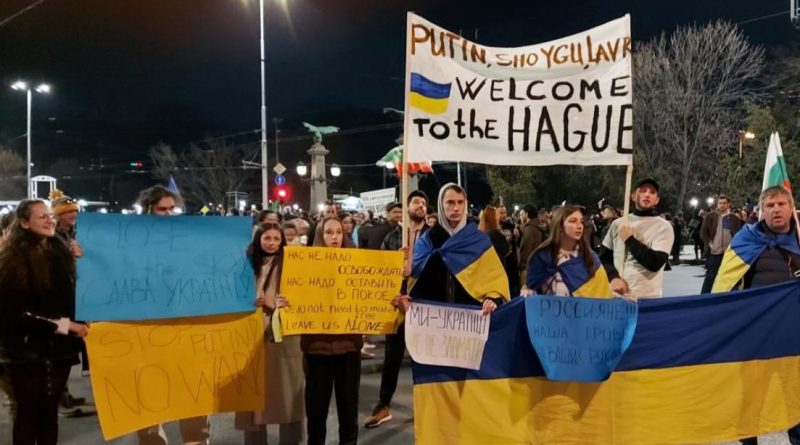 A peaceful demonstration in the centre of Bulgaria’s capital city Sofia on March 24 saw several thousand people express their solidarity with Ukraine and their revulsion at Russia’s war on that country.

The event was held a month to the date since the beginning of Russia’s current invasion of Ukraine.

Ukrainian President Volodymyr Zelenskyy had appealed publicly for such shows of support for his country, under assault from Russia, with Putin’s regime under investigation for a succession of war crimes against civilians.

The turnout on the night of March 24 overwhelmingly dwarfed a previous event in favour of Putin by a pro-Kremlin party that is the smallest in Bulgaria’s Parliament, with just 13 seats out of 240.

The March 24 event began outside the presidential and Cabinet offices, before walking in silent procession to Orlov Most (Eagle Bridge), where minutes of silence were held in memory of victims of the war.

All ages were represented in the turnout, with a predominance of young people. Among those present were Ukrainian students studying at universities in Bulgaria.

On display were Ukrainian, Bulgarian and EU flags, while the flags of Romania, Georgia and the Baltic states were also represented. There were also flags of Free Belarus and Free Syria.

After the stop at Orlov Most, participants were proceeding to the street outside the Russian embassy.

Bulgaria’s government has condemned the war in Ukraine and joined in EU sanctions against Russian figures and entities.

While Bulgaria is leading the formation of a new multinational battlegroup that will be under ultimate Nato command, its government is not sending military aid to Ukraine, because of internal opposition from the Bulgarian Socialist Party, one of four parties in the governing coalition.

Bulgarian Prime Minister Kiril Petkov said on March 24 that his government was recalling Bulgaria’s ambassador in Moscow for consultations, noting that such moves by a country generally result in the other country recalling its ambassador.

The move by Petkov follows a succession of comments by the Russian ambassador in Sofia, insulting Bulgaria, Bulgarians and the country’s government.