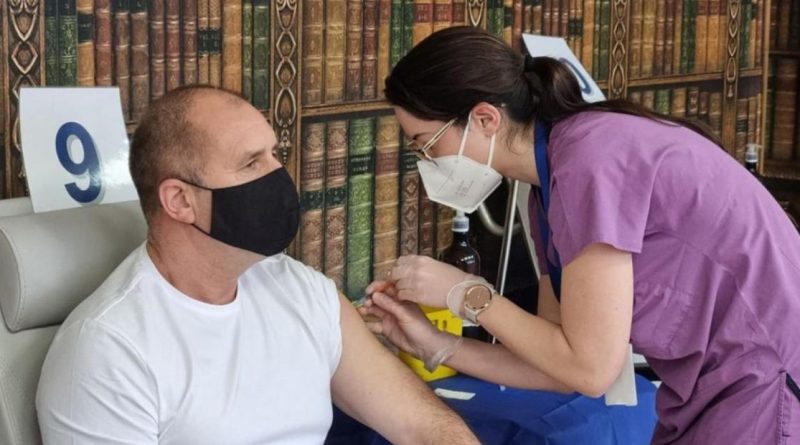 Bulgarian head of state President Roumen Radev received a booster dose of vaccine against Covid-19 at the Military Medical Academy in Sofia on January 6, according to the academy’s website.

Radev was one of 691 people to receive a vaccine booster dose at the Military Medical Academy on January 6. The academy carried out 840 immunisations on Thursday, the statement said.

This was the first public on-day announcement about Radev receiving an injection against Covid-19, and while the Military Medical Academy announced the event, accompanying the item with two photographs, by 7pm it had not been reflected on the presidency’s official website.

Political leaders in Bulgaria largely have been muted or silent regarding the drive for Covid-19 vaccination in Bulgaria, the country with the lowest rate of immunisation against the disease in the EU-EEA area. Former prime minister Boiko Borissov was one of very few leaders to publicise his immunisation, including by streaming his first and second doses live on Facebook.

On the other hand, some politicians in the country have been adamantly against anti-epidemic measures, attempting to tap into that section of Bulgaria’s electorate misled by the lies of anti-vaxxers.

In 2021, an election that saw a presidential and three parliamentary elections, some candidates appeared reluctant to alienate that part of the electorate opposed to vaccination.

Yordanov told reporters after the meeting that the committee had set a goal of getting a further 500 000 people to receive first doses of the vaccine by the end of January, and a goal of a 60 per cent vaccination rate among the population.

The January 6 update by the European Centre for Disease Protection and Control’s online vaccine tracker showed that in Bulgaria, the uptake of at least one dose among the total population was 28.5 per cent, of full vaccination 27.7 per cent and of a booster dose, 4.3 per cent.

Yordanov said that in the first days of 2022, about 32 000 people had been newly vaccinated, about half of them older than 65. According to Yordanov, the over-65s were attracted by the government’s decision to pay a one-off sum of 75 leva to retirees who get vaccinated.

The pandemic committee also is recommending that the quarantine period for the infected be reduced from 14 days to 10, and for contact persons from 10 days to seven.

The coalition government, which took office on December 13, also has pledged a targeted information campaign to encourage Bulgarians to get vaccinated, though details of this campaign have not yet been announced.

While there has been an improvement of late in figures for doses of vaccines against Covid-19 administered in Bulgaria, much of this trend results from people receiving second or booster doses, with relatively low figures for first doses.

As The Sofia Globe reported earlier, the January 6 report by the unified information portal said that so far, 3 768 966 doses of vaccines against Covid-19 have been administered in Bulgaria, a total of 1 927 428 people have completed the vaccination cycle, and 324 454 have received a booster dose. Preliminary results of the 2021 census, announced by the National Statistical Institute on January 6, suggested that Bulgaria’s population is 6.52 million people.

Covid-19 in Bulgaria: 45 deaths registered in past week