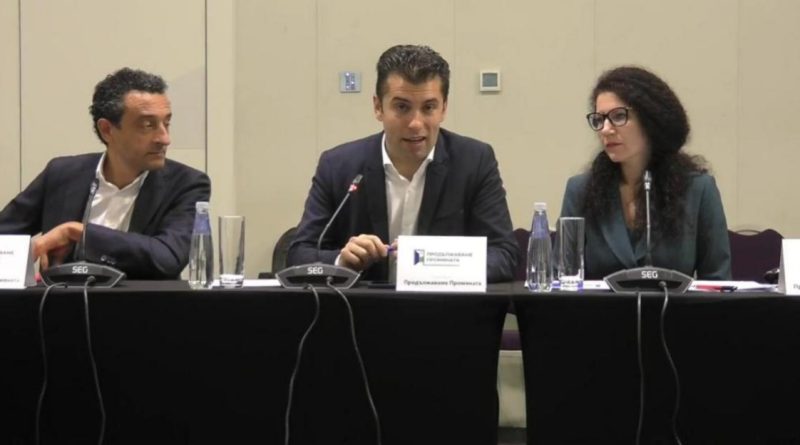 The first of five days of talks on policies of a possible coalition government among representatives of four groups in Bulgaria’s newly-elected Parliament saw some agreements in the first areas discussed.

Involved in the talks are representatives of the We Continue the Change (WCC) party – winner of the most votes in the November parliamentary elections and which will be first to receive a mandate to form a government – as well as the Bulgarian Socialist Party, Slavi Trifonov’s ITN and the Democratic Bulgaria coalition.

Together, these four groups have sufficient seats in the new National Assembly to vote a government into office.

The November 23 morning session opened with a minute of silence for the victims of the Struma motorway bus fire, in which 46 people died.

WCC co-leader Kiril Petkov, who moderated the discussions on economic policies, said that the idea was for all the coalition partners to outline their policies.

“This is not a matter of trading one policy off for another. We want to see the common ground, and where there is a difference, to enter into a deeper expert debate,” said Petkov, who seeks the prime minister’s post in a possible coalition government, and who expressed optimism that a government could be achieved before the end of this year.

He said that points in common could be immediately included in the programme in the coalition government.

Participants in the session on economic policies agreed that restrictions on, and aid to, businesses should be abolished as soon as a sufficiently large proportion of Bulgaria’s population was vaccinated against Covid-19. The country has a high Covid-19 death rate and lags far behind the EU-EEA average for the percentage of the population who have been vaccinated.

Petkov said that the waves of closures, easing, payment of some public money should come to an end. “We cannot damage business at every wave,” he said.

Resources that were limited were being spent instead of being put into targeted investment policies, the result of the public not being sufficiently informed “that the only way to save ourselves from now on is through vaccination”.

“Of course, with the right to choose, but an informed choice,” he said.

Democratic Bulgaria representative, economist Georgi Ganev, proposing that restrictions on businesses should be lifted when a sufficient number of people had been vaccinated, said that this was achievable by the end of the first quarter of 2022.

In the discussions, it was also agreed that the minimum salary should be set as a percentage of the national average.

In the discussions on energy policy, moderated by WCC co-leader Assen Vassilev, it was agreed that Bulgaria needed a new energy strategy.

The participants in the energy group agreed that if electricity prices rise further, the size and scope of the existing energy aid scheme should be extended, from January.

There was also agreement that electricity supply to a household should be cut off after a second unpaid bill, not, as now, after the first.

The participants agreed that state energy companies should be audited and, if irregularities are found, these should be referred to the relevant authorities.

The talks are to continue until Saturday, until there have been discussions on all 18 policy areas identified for discussion.