Bulgaria, which in recent weeks has seen dramatic increases in confirmed cases of new coronavirus, is among European countries classified by the European Centre for Disease Prevention and Control (ECDC) as “of serious concern”.

This emerges from the ECDC’s Rapid Risk Assessment report, issued on October 23.

According to the latest data available to ECDC, the countries whose rates and/or trends cause them to be categorised as of serious concern include Austria, Belgium, Bulgaria, Croatia, Czech Republic, Denmark, France, Hungary, Iceland, Ireland, Italy, Latvia, Lithuania, Luxembourg, Malta, the Netherlands, Poland, Portugal, Romania, Slovenia, Slovakia, Spain, Sweden and the United Kingdom.

The ECDC said that these countries have been categorised as “of serious concern” on account of having high or increasing case notification rates and/or test positivity ≥3 per cent, as well as high notification rates in the older age groups and/or high mortality rates.

Although there has been a general increase in the levels of testing across all countries, which has resulted in the identification of additional cases who are asymptomatic or have experienced a mild form of the disease, this increase in testing does not explain the full epidemiological picture in these countries, the ECDC said.

“In fact, the concurrent increase in test positivity observed in many countries, which for some has been accompanied by an increase in hospital and ICU admissions, indicates an escalating epidemiological situation.

“Therefore, the overall probability of infection for the population in these countries is very high,” the ECDC said.

In many of these countries, the notification rates in some sub-national areas are very high, and rates in other areas have been increasing.

A number of the countries have seen a recent escalation in the notification rates for the older groups. This is of particular concern as the elderly are at increased risk of severe disease, the report said.

“Hospital and ICU admissions and occupancy have been increasing and some sub-national areas have already signalled that there is significant pressure on their healthcare services.”

While improved care and better detection of infections among younger people may partially explain the lower mortality than earlier in the year, countries are already experiencing, or may observe increasing death rates if transmission continues to rise.

A detailed analysis of the comorbid status of hospitalised patients may shed light on the evolution of death rates, the report said.

“All EU/EEA countries and the UK have implemented various non-pharmaceutical interventions, but these have not been fully successful in controlling transmission, and the epidemiological situation is now rapidly deteriorating.”

Implementing stricter non-pharmaceutical interventions, which proved to be effective in controlling the epidemic in all EU/EEA countries and the UK during spring 2020, appears to be the only available strategy that may have a moderate (as opposed to high) impact on the disease for individuals and healthcare provision.

This results in an overall assessment of the general population being at high risk.

For vulnerable individuals, having a very high probability of infection and a very high impact of disease, the overall risk in these countries is assessed to be very high, the ECDC said. 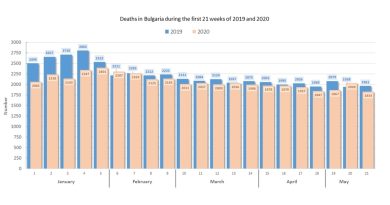 Graphs show trends in Bulgaria in deaths, unemployment and visitor numbers in 2020 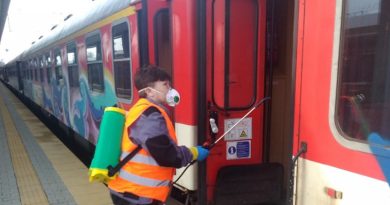