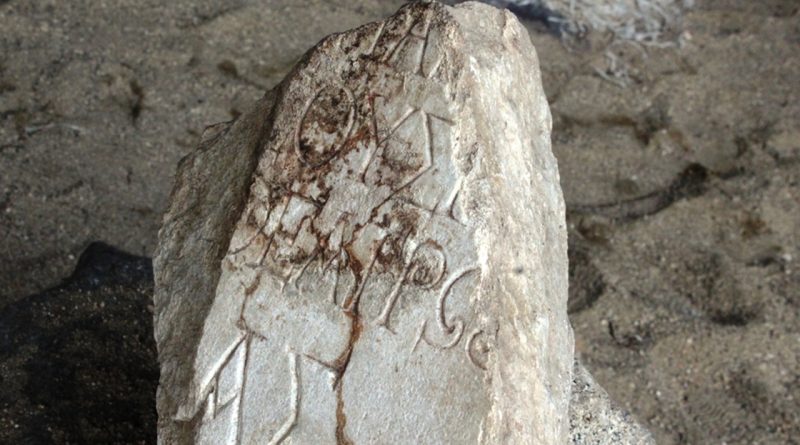 A fragment with an inscription in Ancient Greek, dating from the first decades of the second century CE, has been found at the Great Basilica site in Bulgaria’s second city Plovdiv.

The dig team headed by Zheni Tankova made the find on June 7, Plovdiv news website podtepeto reported on June 11.

They found a total of three fragments that probably were part of a large statue dedicated to a distinguished resident of Philippopolis, as Plovdiv was named in ancient times.

The Great Basilica is estimated to date from the fourth to the fifth centuries.

In the late antiquity period, with the construction of the Basilica, the pedestal of the statue was re-used, broken up to become part of the support of the main paving of the atrium.

Epigraphist Professor Nikolai Sharankov came to the site on June 11 to examine the lettering on the stone slab.

“It is very interesting that for the first time we have an inscription mentioning the Ancient Theatre directly. Before, another inscription was found linking the Basilica to the theatre – a list of members of the Elders’ Council, including the name of its treasurer who built a loggia in the theatre,” Sharankov said.

He said that the new find was the second link between these two most significant sites in Philippopolis.

“Fortunately, of the inscription, ‘Teatro’ survived. Otherwise, it was part of a large masonry pedestal for a statue in honour of a prominent citizen of Philippopolis, honoured for his beneficence to the city. What can be seen is that he organised some celebrations in honour of all gods and goddesses and was probably honoured with a statue in the theatre,” Sharankov said.

The inscription dates from the first decades of the second century CE, the time of emperor Trajan or Hadrian, and was done in the same workshop that produced all the official inscriptions for the city during that time.

It can be concluded that this inscription, in honour of one of the most prominent citizens of the city, stood somewhere nearby before it was re-used during the construction of the Basilica in late antiquity.

“We hope there may be more fragments of the text in order to try to restore it more fully, as well as to understand the name of this person, about whom we have only two letters for now,” Sharankov said.