Over the past day, Bulgarian Border Police detained 87 foreign nationals who had attempted to cross the Bulgarian-Serbian border illegally, the Interior Ministry said on August 13.

At about 8pm on August 12, Border Police based at Trun found 54 people in the village of Bankya without identity documents.

The group included 40 people from Afghanistan, 11 Pakistanis, two Iraqis and an Indian.

A check-up established that 41 were registered with Bulgaria’s State Agency for Refugees. They were issued with formal warnings and removed from the border area.

The other 13 were taken in custody and placed in a detention centre.

Border Police based in Belogradchik detained 16 foreigners without documents near the village of Salas, the Interior Ministry said. The foreigners said that they were Iraqis. Border Police at Kalotina detained 17 Afghan citizens near the Bulgarian-Serbian border.

On August 12, the Interior Ministry said that a total of 166 foreigners without documents had been taken into custody in the capital city Sofia, after police checked about 300 people.

The operation was part of an ongoing series intended to find people illegally in the country and act against people-traffickers in Sofia.

The ministry said that Border Police in Smolyan in south-eastern Bulgaria had handed back to Greece 11 Iraqis who had crossed into Bulgaria illegally. The Iraqis had been found in a van. The van’s driver and two accomplices had been charged with people-trafficking.

Meanwhile, Border Police based in Dragoman in western Bulgaria had taken into custody 53 foreigners who had attempted to cross the Bulgarian-Serbian border illegally, while in Elhovo in south-eastern Bulgaria, Border Police prevented 11 attempts by 150 migrants to cross the Turkish border illegally, the Interior Ministry’s August 12 statement said.

Meanwhile, on August 13, Bulgarian National Radio said that Turkey had proposed to Bulgaria to establish a bilateral co-operation mechanism on illegal migration problems.

The offer was made by Turkish prime minister Binali Yildirim in a telephone conversation with his Bulgarian counterpart Boiko Borissov.

Borissov agreed with the proposal, with it being emphasised that such an initiative would not mean cancellation of the agreement with the EU, of which Bulgaria is a member – on migrants. The Bulgarian government press office confirmed that talks had been held between the two heads of government.

Close to 90 per cent of Bulgarians own their own homes, statistics for 2016 show 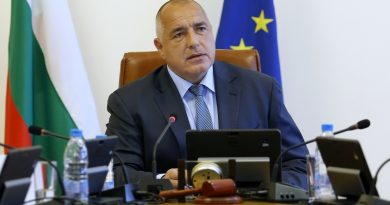