A total 36 out of 1605 samples tested in Bulgaria in the past 24 hours for new coronavirus produced positive results, the national operational headquarters said on May 23.

This brings the total number of confirmed cases of new coronavirus in Bulgaria to date to 2408, counting in those who have died and those who have recovered from the virus.

The number of people who have died has increased by one, a 74-year-old woman who also had COPD and coronary heart disease, to a total of 126. Of those who have died, 83 were men and 63 were women.

The number of people who have recovered from the virus has increased by 39 in the past 24 hours to a total of 808.

A total of 258 people are in hospital, 29 of them in intensive care.

Of the 36 new positive test results, three were workers at a motor vehicle plant in Bulgaria’s town of Pazardzhik, bringing the total number of workers there who have tested positive to 25, out of 510 samples tested so far.

The workers who have tested positive have been placed in 28-day quarantine, as having 90 other people who were in contact with them. The plant will resume operations on May 26 and further tests will be performed.

Economy Minister Emil Karanikolov told Bulgarian National Television in an interview that of the companies in Bulgaria that had suspended operations because of the coronavirus crisis, about 15 per cent had gone bankrupt. The others were resuming operations, he said.

In Plovdiv on May 23, police and Bulgarian Food Safety Agency officials were checking whether restaurants, bars and coffee shops were complying with anti-epidemic measures.

By noon on Saturday, two places had been shut down for non-compliance.

Georgi Kazakov, head of the economic crimes squad in Plovdiv, said that throughout the weekend, the joint inspections by police, health and food safety officials would continue.

Ninety-seven places in Plovdiv had been inspected so far. The most common violation was failure by staff to wear protective masks. Penalties had been issued, Kazakov said.

Bulgaria’s Foreign Ministry said that as of May 22, the government of Serbia had lifted the restrictions on foreign nationals entering the country.

All Serbian border crossings with neighbouring countries are open to all traveling by car, minibus and bus in both directions, the statement said. Those entering the country must fill out a declaration, available in Serbian and in English, that they are aware of the epidemiological situation in the country and ways to prevent new coronavirus infection. 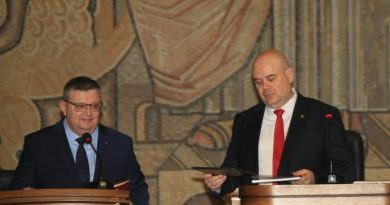