All files on loans by Corporate Commercial Bank must be made public to expose any connections with politicians and members of the judiciary, Bulgarian President Rossen Plevneliev said in a special address to the National Assembly on July 25 2014.

“It’s been 25 years and the whole truth about affiliations of the country’s elite to the communist State Security has still not been told. Today we must not allow the same mistake to be made again. Our children will not forgive us if we do not open the Corporate Commercial Bank files,” Plevneliev said.

He was speaking a day after the National Assembly accepted the resignation of the “Oresharski” cabinet and amid the continuing controversy about Corporate Commercial Bank, placed under special supervision by central Bulgarian National Bank on July 11.

Plevneliev said that the Corpbank files were “a goldmine for blackmailing politicians, just like those of State Security”.

If the truth about Corpbank did not come out, Bulgaria’s transition would continue for years, he said.

If the whole truth about illegal connections to judges, politicians and public figures were revealed, the simulated transition would come to an end and the real one would begin, Plevneliev said. The Bulgarian state would make a brave leap forward in moral terms.

“Corporate Commercial Bank is the big test for the Bulgarian state and politicians.”

Plevneliev said that Bulgarian National Bank, the Financial Supervision Commission, the Prosecutor’s Office, the Commission for the Prevention and Detection of Conflict of Interest should co-ordinate their actions and “finish the job properly”.

This meant a complete review of assets, valuations of loans and securities, and Bulgarian and international auditors to assess whether there was a “hole” in the bank and if there was, how big it was.

Plevneliev called for the National Assembly to accept the amendments to the budget of the National Health Insurance Fund and the national Budget, as proposed by the current government, to resolve the matter of the BNB governor and to enable the coming caretaker government (to take office on August 6) to negotiate foreign loans.

He said that in less than a year and a half, a second government had resigned.

Noting that there had been three changes of government since the beginning of 2013, he said that this was sign of the risk of further ongoing instability.

Urging a joint effort to bring the country out of its difficulties, Plevneliev said that there was a growing sense of a deepening institutional crisis.

“From today until August 6 (the day that the current National Assembly will be disbanded), the Bulgarian institutions should continue carrying out their duties responsibly and properly. There is still work to be done,” Plevneliev told MPs.

He said that the budget amendments were required so that “all institutions, the hospitals, the municipalities, every single citizen, will not be burdened with additional negative effective effects of the political instability in the country”.

“I hope that together with the political parties we will go through the constitutional procedure and keep to the dates that have been agreed, elections on October 5, dissolving the 42nd National Assembly on August 6 and appointment of the caretaker cabinet,” Plevneliev said.

The President initiated the steps required on July 24, offering a mandate to govern to the National Assembly’s largest party, GERB, which – as expected – that party’s leader, Boiko Borissov, returned immediately.

Plevneliev was scheduled to move to the second phase on the afternoon of July 25 by offering to the second-largest party, the Bulgarian Socialist Party, a mandate to govern. After the BSP returns this mandate, Plevneliev will offer a mandate to the Movement for Rights and Freedoms, also expected to decline it. 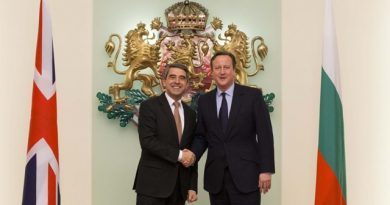