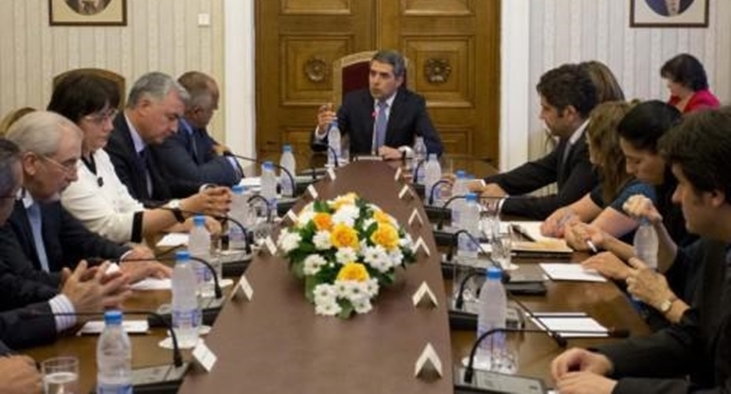 A few hours after Bulgaria’s National Assembly accepted the resignation of the cabinet, head of state President Rossen Plevneliev initiated the steps that will take the country towards a caretaker cabinet in August and early parliamentary elections on October 5.

Plevneliev invited leaders and representatives of all four parties represented in the National Assembly to meet him simultaneously, saying he wanted to avoid any suggestion of backroom deals.

Three out of four came to the meeting, with the smallest party, Volen Siderov’s far-right ultra-nationalist Ataka party absenting itself. Also absent was the leader of the Bulgarian Socialist Party, Sergei Stanishev, now an MEP. The BSP delegation was headed by parliamentary group leader Atanas Merdzhanov.

Plevneliev, speaking after the meeting, said that those taking part had told him that it would not be possible for the parties in the 42nd National Assembly to come up with a stable majority that would be able to support a functioning government.

He said that he regretted that Ataka had not come to the consultations. “Apparently this is the way they understand and publicly demonstrate their attitude towards the institutions and constitutional order in the country,” Plevneliev said.

These issues were, first, amending the national Budget and the budget of the National Health Insurance Fund, second, authorising the caretaker cabinet to negotiate and conclude contracts for foreign loans for financial stabilisation, and third, ensuring the efficiency of the Bulgarian National Bank in the time when there will be no functioning Parliament.

He called for the national Budget amendment to be done on the basis of an objective, not political, and professional and expert objective reading of revenue, the cost of debt, the deficit and the risks that should be compensated for by the end of the year.

Soon after his statements, the ritual began of offering mandates to govern in line with the procedures set out in the Bulgarian constitution.

The rules are that a mandate is offered first to the largest party, then to the second-largest and third to a party of the President’s choice (in the current National Assembly, that would leave a choice of only two – the Movement for Rights and Freedoms, and Ataka).

In a moment televised live, Plevneliev offered a mandate to GERB leader Boiko Borissov, who within a few seconds formally returned it.

Plevneliev said that he would offer a mandate to the Bulgarian Socialist Party on July 25, and after that to the Movement for Rights and Freedoms. His statement did not specify whether the mandate offer to the MRF would be made on the same day.

After the conclusion of the mandate-offering ritual with Borissov, Plevneliev said that he and the GERB leader would sit down to discuss the tasks for the caretaker cabinet.