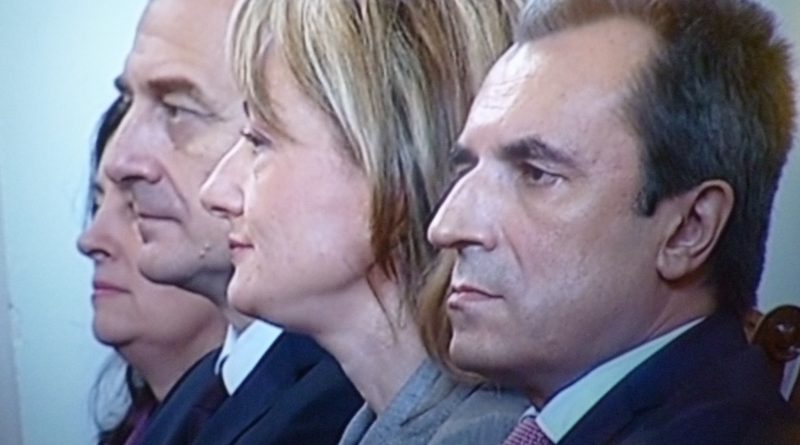 Bulgaria’s unicameral Parliament, the National Assembly, voted on July 24 2014 to accept the resignation of the cabinet that Plamen Oresharski, nominal head of the government, had tabled the previous day.

The vote was 180 in favour, eight against and eight abstentions. A total of 175 MPs voted out of the 240 members of Bulgaria’s National Assembly. 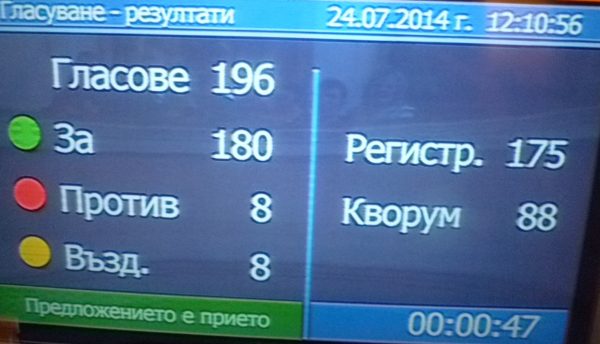 MPs from the smallest party, far-right Ataka, were present, suspending their boycott to return, although Ataka leader Volen Siderov was absent after he said he would not be able to come to Sofia in time for the vote.

Almost at full complement were the parliamentary groups of the Bulgarian Socialist Party and the Movement for Rights and Freedoms, the two parties “supporting the government”.

Speaking in debate on the vote to accept the resignation of the governnment, senior GERB MP Tsvetan Tsvetanov said that the current Parliament was departing with the lowest public approval rating of any Bulgarian legislature in the past 25 years – and the “longest fences”, a reference to the heavy barriers outside the National Assembly building placed in response to months of anti-government protests.

Lengthy debate on the vote was characterised by an atmosphere of recrimination typical of the 42nd National Assembly.

Atanas Merdzhanov, head of the BSP parliamentary group, said that GERB had not behaved like parliamentarians nor even as an opposition, but rather as a “sabotage group”.

The cabinet will remain in office in an acting capacity until August 5, when head of state President Rossen Plevneliev will announce a caretaker cabinet to take Bulgaria into early parliamentary elections scheduled for October 5. The 42nd National Assembly is scheduled to be dissolved on August 6.

The current Parliament held its first sitting on May 21 2013 after early parliamentary elections, and the cabinet took office on May 29, on the basis of a mandate handed to the Bulgarian Socialist Party, which had run second in the elections but got the chance to govern because centre-right GERB, which had won the most votes, had no allies with which to form a cabinet.

The morning’s proceedings on July 24 included the swearing-in of a new MP, Tsonka Kasnakova-Ilieva of GERB, taking up a vacant seat and who is set to the shortest-serving member of the 42nd National Assembly.

Bulgarian cabinet resignation – what happens next

After EMA report, Bulgaria to continue with AstraZeneca vaccines

Bulgaria elections 2017: The week that was, March 5