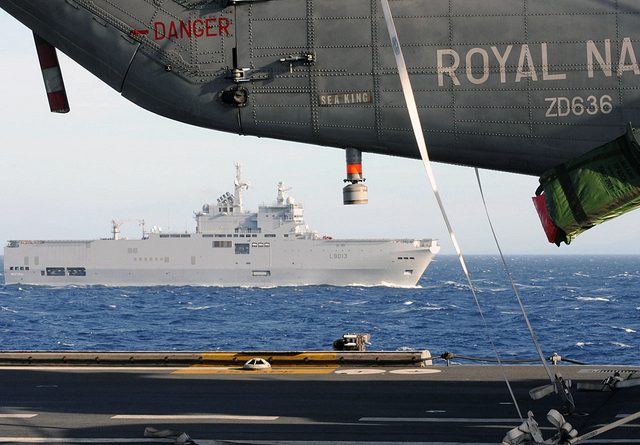 France’s contract to sell a pair of Mistral aircraft carriers to Moscow has come under fire in recent months, as relations between the West and Russia have deteriorated over Ukraine.  Last month, US president Barack Obama said it would be preferable if France pushed the “pause button” on the deal.

“I have expressed some concerns, and I do not think I am alone in this, about continuing significant … defense deals with Russia at a time when they have violated basic international law and the territorial integrity and sovereignty of their neighbors. So President Hollande understands my position,” he said.

But this week, French president Francois Hollande said the first Mistral would be delivered to Moscow in October, as planned. He added there were no sanctions in place to force France to cancel the deal.

But with the downing of the Malaysian airliner in eastern Ukraine, the European Union has agreed to tighten sanctions against Moscow. And as the 28-member bloc considers new sanctions, the French Mistral sale is coming under fire.

British Prime Minister David Cameron said it would be “unthinkable” for Britain to go ahead with a similar contract. Lithuania’s president suggested France was compromising its values. Speaking before an EU meeting Tuesday in Brussels, Sweden’s Foreign Minister Carl Bildt did not mention France by name, but the message was clear.

“I think we should have had an arms embargo quite some time ago,” he said. “I do not think that is necessarily the answer.  But of course to deliver arms to Russia in this situation is somewhat difficult to defend, to put it mildly.”

Tran says that if France breaks the contract, it might be considered an unreliable supplier, which will hurt its chances for future deals.

“On the one hand, there is a contractual obligation to Russia, which is important in terms of keeping a place in the arms market, the world arms market,” he said. “There is also, of course, a political decision on how to maintain relations with friends, allies and partners, allies like Poland, like Britain, like the US.”

France is not the only country that has deals with Russia. Germany imports energy from Moscow, and Britain’s The Guardian newspaper reported Wednesday a study by British lawmakers found 200 licenses to sell weapons to Russia remain in place, despite Cameron’s claim of an absolute arms embargo against Moscow.

In France, Socialist Party Secretary Jean-Christophe Cambadelis told French TV Cameron was in no position to criticize the Mistral deal, given the number of Russian oligarchs seeking financial refuge in London. What is clear is the Mistral deal underscores the difficulties Europe faces in tightening sanctions on Russia.

Turnout in disputed Crimea vote about 64 per cent