The state will compensate hoteliers with 40 leva (about 20 euro) a day for each accommodated Ukrainian refugee, Tourism Minister Hristo Prodanov said on March 4.

Payment will begin next week and will cover costs retroactively, Prodanov said.

The Cabinet office and the Finance Ministry will publish the requirements on how to submit applications.

Owners of private hotels as well as holiday resorts of municipalities and government agencies will be eligible for the assistance.

Bulgarian media have reported that some hoteliers had been forced to ask refugees from Ukraine to pay for their stay because the owners were running out of money to provide heating and food.

In other news in Bulgaria on March 4 related to Putin’s war on Ukraine:

Tafrov cited the insulting language used towards Bulgaria by the Russian embassy.

He said that many EU countries had lowered the level of diplomatic relations for lesser offences than such insulting language.

“As a country, Bulgaria must preserve its dignity. No ambassador has the right to insult a Bulgarian citizen,”

He also noted that Mitrofanova had been summoned to the Foreign Ministry this week, but had not gone, instead sending her deputy.

Sofia Tech Park said on March 4 that it was already housing four Ukrainian citizens and had accommodation for more.

The Park Hostel offers accommodation in double, single rooms and an apartment for up to 15 people, and the rooms are fully equipped and furnished. Food and other necessities will be provided.

The team of Sofia Tech Park is ready to provide suitable premises for about 100 more places for accommodation of Ukrainian citizens in another building in the park, the statement said.

The company will also provide assistance to Ukrainian citizens to find jobs through its network of partners from the innovative ecosystem in Bulgaria.

Sofia Tech Park is also working on the creation of classrooms, where, if necessary, to organise a learning process for children from Ukrainian families, who will be accommodated in the science and technology park.

A national electronic register of bomb shelters will go online next week, the head of the Interior Ministry’s fire safety and population protection, Nikolai Nikolov, said on March 4.

“At this stage, there is no room for panic among us, given the hostilities that are taking place several hundred kilometres from the country,” Nikolov said.

He said that the bomb shelters were inspected every year. Practically all buildings in Bulgaria after 1950 had shelters, he said.

The equipment in the shelters was old but the shelters met construction requirements, said Nikolov, underlining that everyone could be calm and that he did not see who would attack Bulgaria and why.

Bulgarian PM Borissov: Black Sea should be a demilitarised zone 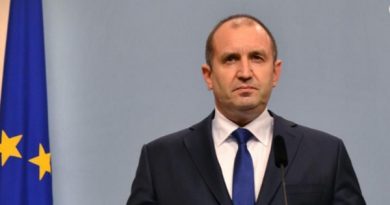