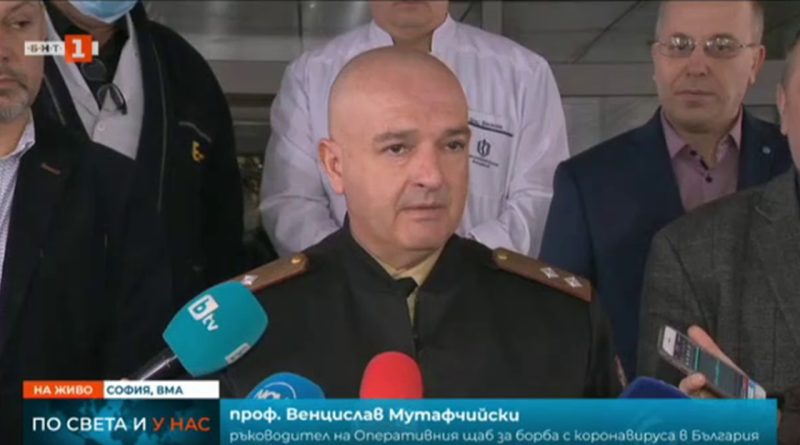 The total number of confirmed cases of Covid-19 new coronavirus in Bulgaria now adds up to 43, crisis staff chief Major-General Ventsislav Mutafchiyski told a briefing at 8am on March 15.

This total includes the two deaths, a 74-year-old man who tested positive for new coronavirus and who died on March 14, and his 66-year-old wife, also infected with coronavirus, who died earlier this week.

Mutafchiyski told the briefing that he had spoken on Sunday morning to the head of Bulgaria’s Border Police, who were taking even more restrictive measures for all those arriving in the country.

Teams were tracking down people who had been in contact with those confirmed as having Covid-19. Interior Ministry and regional health inspectorates staff were part of these teams. However, there was a serious short of health professionals for this, and consideration was being given to involving employees of the National Health Insurance Fund, Bulgarian Food Safety Agency and other bodies.

He said he was pleased to see a good result of the call for volunteers at Alexandrovska Hospital, where 77 people had enrolled, among them former Health Minister Dr Ilko Semerdzhiev, students and post-graduate students.

For several days, the process of recruiting volunteers at Military Medical Academy has been underway. This included students and doctors who had volunteered to assist at the infectious diseases clinic.

“This is extremely satisfying and encouraging for us, because it shows that the medical profession in Bulgaria shows high moral qualities and a very quick reflex to react in such a complex situation with a clear awareness that at the moment we are only on the verge of a problem,” Mutafchiyski said.

There were several other developments related to the Covid-19 situation in Bulgaria in the past 24 hours.

Sofia mayor Yordanka Fandukova said that the delivery of medicines and food was being organised in Bulgaria’s capital city for those most at risk of Covid-19 infection, the elderly. The service will be provided by social workers. If necessary, volunteers from Sofia municipality will be involved.

All necessary products will be bought on request using the money of the elderly people. Sofia municipality called on everyone who has elderly relatives to help them with their shopping so that they do not have to go outside.

In a separate announcement, mayor Fandukova said that she had ordered a halt to planned maintenance work by power utility CEZ and water utility Sofiyska Voda, which would have led to temporary electricity and water supply cuts in parts of the city.

Bulgarian state railways BDZ has issued a call to passengers to buy tickets online and not go to ticket offices, to prevent crowding. Through the online system it is possible to buy tickets for all trains on the territory of the country. The online ticketing platform is available at: https://bileti.bdz.bg/.

Tickets can be purchased online no later than three hours before the departure of the train. The online ticket purchased can be validated by the train conductor directly from the client’s mobile device.

Bulgarian media reported on March 14 that the Black Sea municipality of Bourgas had called on people not to travel to Sofia. “As of today, we consider Sofia a risky destination and I advise people not to travel there. Bourgas municipality is stopping all official trips by its employees to the capital,” mayor Dimitar Nikolov was reported as saying.

Seventy-four residents of Bourgas are under quarantine after returning from risky destinations. The municipality envisages posting notices on the front doors of people under quarantine, specifying the duration of the quarantine.

Nikolov was quoted as saying that he had asked the national crisis staff to close Trakiya Motorway to Bourgas and only allow cars from areas where there had been no cases of coronavirus. This had been refused, he said.

The Bulgarian Orthodox Church, which has been amid controversy since its decision to keep all churches open and proceed as normal with Easter-related services, announced on March 14 that the Sunday morning service at Sofia’s landmark Alexander Nevsky cathedral would be streamed live via Facebook, Plovdiv Orthodox Television and BNT2.

In Plovdiv, where – like everywhere in the country – restaurants and eateries are banned from opening, The Garden in Yanko Sakazov Street decided that the large quantity of bread it had in stock should not go to waste. It placed all of its loaves of bread on a bench outside the restaurant, with a notice to the public to please take them for free.