A regular three-monthly poll by the National Statistical Institute (NSI) has found a slight drop in consumer confidence in Bulgaria, according to results released on February 7.

In January 2020, the total consumer confidence indicator dropped by 0.5 percentage points in comparison with October 2019, which was entirely because of decreased confidence among the urban population, the NSI said.

In 2019, the NSI polls in January, April, July and October all showed increases in consumer confidence.

In January 2020, opinions about the general economic situation in Bulgaria over the past 12 months had deteriorated slightly compared with the October poll, the NSI said.

Opinions about changes in consumer prices over the past 12 months were also more unfavourable.

Expectations about inflation over the coming 12 months were largely the same as in October.

Consumers in Bulgaria were slightly more positive in their forecasts about unemployment.

In January, most consumers continue to see the economic situation in Bulgaria as unfavourable for saving, although the number taking this view was slightly down compared with October.

Among Bulgaria’s rural population, there were slightly more positive attitudes about being able to make major purchases of durable goods or buying a car over the next 12 months, the NSI said. 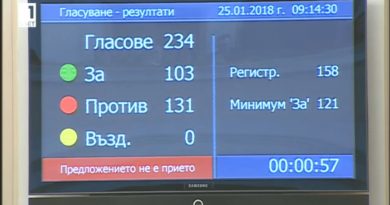 Bulgarian Parliament rejects motion of no confidence over corruption