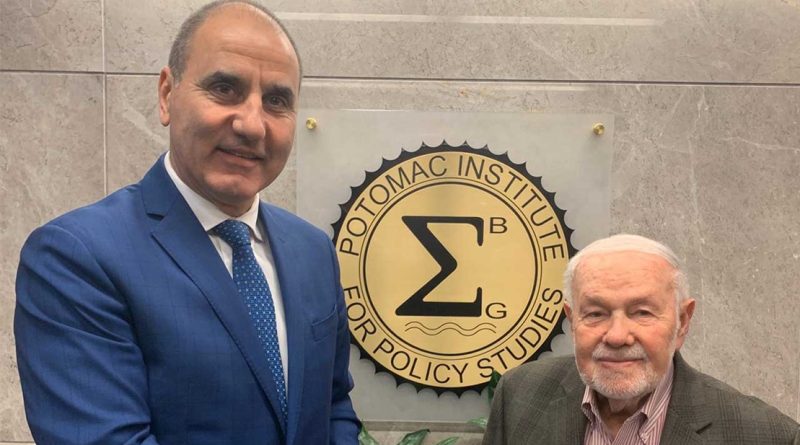 Euro-Atlantic Security Center (EASC) head Tsvetan Tsvetanov has held a succession of meetings with heads of influential research institutes in Washington DC in recent days, while also taking part in a security conference at the US Senate, according to the EASC’s website.

The security conference at the US Senate was organised by Republican Party Senator James Inhofe and Republican Congressman Robert Aderholt and focused on the vulnerabilities and difficulties of deploying wireless 5G networks.

The participants agreed that this was one of the most significant security threats for the years to come, mainly due to the origin of some of the network technologies, the EASC statement said.

Representatives of the US Congress expressed strong concern over the possibility of Chinese technology giant Huawei to participate in the construction of next-generation 5G networks in European Union countries and the United Kingdom.

Indiana Congressman Jim Banks announced a bill initiated by him, which suggests that allied countries using Huawei technologies in their communication networks would be subject to restrictions and sanctions on sharing classified information.

Tsvetanov said that many EU countries are already introducing Huawei technology components through their communications operators, which are essentially private companies. This requires a unified integrated approach to deliver a common outcome for all allies, as these are not problems of market mechanisms, but issues concerning national security and the security of the collective structures to which we belong.

Tsvetanov also held talks with one of the leading US researchers on Eastern Europe and Russia – Janusz Bugajski from the Center for European Policy Analysis (CEPA). The two discussed various aspects of regional security, including energy security through the prism of diversifying supplies and major energy sources.

Tsvetanov and Bugajski agreed that today’s challenges are dynamic and asymmetrical, coming from countries not belonging to the free and democratic world. A desire was expressed to deepen the joint work between the EASC and the Center for European Policy Analysis, including joint events and exchanging expertise on issues of common interest.

A meeting with Jan Brzezinski, a senior research fellow at the Atlantic Council, was dedicated to the Three Seas Initiative, which the EASC is actively working on.

Tsvetanov briefed Brzezinski on the progress with the organization of the forthcoming conference on the topic in Sofia, initiated by the Center, which is to take place at the end of February.

Tsvetanov said that speakers at the conference from the Administration of the Bulgarian President and the Council of Ministers have been confirmed. It was noted that institutional cooperation at national level is key to achieving the goals of each country participating in the Three Seas Initiative. Officials from the Estonian Presidency of the format will also attend the conference as speakers.

The event has the ambition to bring together heads of EU and US diplomatic missions in Bulgaria. Brzezinski and Tsvetanov voiced confidence that the Three Seas Initiative would gain significant support in Bulgaria after the Sofia conference, and that the event would give an additional boost to the initiative in the region.

It is expected that within the next 12 months an organizational Secretariat for the Initiative will be established, while the Investment Fund under the Three Seas Initiative, which has huge potential with financial and investment resources, will be operational.

Tsvetanov met with Professor Yonah Alexander, member of the Board of Regents of the influential Potomac Institute for Policy Studies and director of the International Center for Terrorism Studies.

Professor Alexander is a leading specialist in counterterrorism, one of the first researchers of the al-Qaeda leader Osama Bin Laden. He is the author of numerous publications related to Hezbollah and its impact on the political processes in the Middle East.

Tsvetanov presented the priorities of the EASCr for this year, as well as the forthcoming publication of the first Annual Report of the Center. Prof. Alexander expressed interest in the publication and willingness to distribute it in the research network of the Potomac Institute, covering over 40 countries. In turn, he presented two studies at the International Center for Terrorism Studies – “Security challenges in the Balkans” and “The role of diplomacy in global relations – past lessons and future perspectives.”

The two agreed to sign a Cooperation Agreement in the following months, which will allow them to join the academic efforts of their organizations in future collaborative research. As a first concrete step, Tsvetanov will participate this Thursday in a conference in Georgetown on security in the Middle East and the role of the pro-Iranian Hezbollah. The event is co-organized by the International Center for the Study of Terrorism and the International Law Institute in Washington.

Tsvetanov is on a working visit to Washington to consolidate EASC contacts with leading US think tanks, as well as to establish new forms of cooperation and launch joint projects.

Tsvetanov had a working meeting with Ambassador Daniel Fried, a former Assistant Secretary of State and currently a distinguished fellow with the Atlantic Council.

Tsvetanov and Fried discussed regional aspects of security in Southeast Europe, including the growing asymmetric threats in the region.

At the end of March 2020 the Euro-Atlantic Security Center will present Ambassador Fried’s book “The United States and Central Europe in the American Century” in Bulgaria. The book marked the centenary of Poland’s independence (1918 – 2018) and provides a historical overview of the emergence of nation states as a result of the collapse of the Russian and Austro-Hungarian empires.

Special attention is also paid to President Woodrow Wilson’s famous Fourteen Points, which, according to the author, are essentially the first US strategy for a global rule-based order.