Valeri Simeonov, leader of the National Front for the Salvation of Bulgaria – part of the ultra-nationalist minority partner in the coalition government – was on November 20 elected one of the National Assembly’s Deputy Speakers.

By the rules of Bulgaria’s National Assembly, each official parliamentary group is entitled to a Deputy Speaker’s post.

The vote was 118 in favour, six against and there were six abstentions. Before the vote, the Movement for Rights and Freedoms, traditionally a political enemy of the United Patriots, walked out of the House.

Ataka MP Pavel Shopov said that unlike the MRF, the party of which he is a member would not walk out, and described the conflict between Simeonov’s NFSB party and the MRF as “imaginary”.

Simeonov’s election was a “logical continuation of all that has been done in recent months,” Shopov said.

The United Patriots, then made up of Krassimir Karakachanov’s VMRO, Volen Siderov’s Ataka and Simeonov’s NFSB, became the minority partner of Boiko Borissov’s third government when it was formed in May 2017.

Since then, the United Patriots group was rent asunder by infighting. Karakachanov remains a Deputy Prime Minister and Defence Minister, while Siderov was ousted as leader of the United Patriots parliamentary group and following his recent election as a Sofia city councillor, resigned from Parliament. Simeonov was a Deputy Prime Minister but resigned in November 2018 amid controversy over offensive comments he made about protesting mothers of children with disabilities. 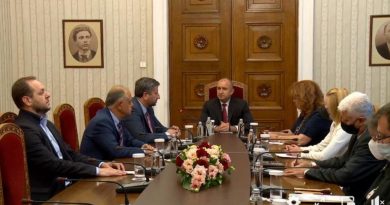