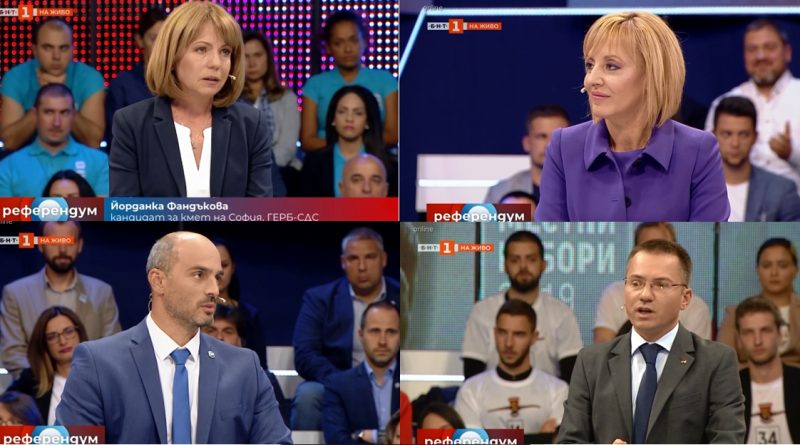 Four of the 20 candidates in the autumn 2019 mayoral elections in Bulgaria’s capital city Sofia met in a debate broadcast live on Bulgarian National Television’s weekly Referendum programme on the evening of October 15, duelling on issues from public transport to pavements to clean air.

It went on for an hour, at the end of a long day, full of hard news such as the outrage over Bulgarian football fans racism at the match against England, the government meeting urgently over the Syria crisis, and Australian murder convict Jock Palfreeman walking (semi) free from the Busmantsi detention centre.

Still, The Sofia Globe is committed to covering the fight for Bulgaria’s big cities in these elections, and Sofia is the biggest of them all, so Referendum triumphed over kitten videos on Facebook and vintage 1970s rock on YouTube. Was it worth it? Did the punters of the public broadcaster emerge much the wiser?

In the arena of the studio were incumbent mayor and GERB candidate Yordanka Fandukova, her rival, the Bulgarian Socialist Party-backed Maya Manolova, Democratic Bulgaria’s Borislav Ignatov, and ultra-nationalist Angel Dzhambazki.

Manolova had more than a shout-out to Boris Bonev, he of Spasi Sofia (“Save Sofia”) fame, he of the NGO that has gained much traction with its whingeing about the state of the capital city’s pavements and tramlines. She would like to give some of her time to him, she said of this Banquo.

Well yes, Bonev is, by the poll of Alpha Research, one of the only five of the 20 candidates to have gained a percentage higher than to be ranked among the 15 “other”. But he wasn’t there, but astute observers, including those of us who would have preferred to be watching kittens, saw in this a blatant reach by Manolova for his voters at the quite possible second round. Why, she said, she had it in common with Banquo, sorry, Bonev, that they were the only two nominated by an initiative committee.

Fandukova has the advantage and curse of incumbency. Whether on transport or parking or anything else, she had at hand a litany of all the marvellous things that had been done, and would be done in her putative fourth term as Sofia’s first citizen. Once the third line of the metro was ready, next year a further half a million people would be travelling by underground railway. There were similar messages about the great advances in building more schools and kindergartens, the march of progress that a new mandate would bring was inevitable, all it needed was your votes.

She reiterated the now-familiar campaign message, at least familiar to those of us keeping a beady, jaundiced, if sometimes watering eye on these elections. It would take work, not fairy tales. What, no fairy tales? Especially for those of us who have an affinity for thinking them up, especially if involving, somehow, kittens.

Manolova had much to say about the biggest evidence of “violations” being how public procurements in Sofia are handled. One candidate tended to get hundreds of millions of leva in tenders, she said. Later, she had Toplofikatsiya Sofia, the heating company, in her sights. Sofians paid for everything three times, she said, at the point in debate when it came to air quality. First, the cost of the project, second the fine for violating the law, and third, for medication for the children ill from Sofia’s bad air. She also had some fine ideas about expanding the availability of the “green ticket” discount for public transport when air quality is below accepted standards.

I have it on good authority that Manolova is a cat lover. Should she lose a putative second round, given that she would be technically unemployed after resigning as national Ombudsman, she would have serious kitten time. Should she win, she would gain many new social network followers, and opportunities to share kitten videos, between presumably taking up the cudgels against dodgy public tenders and stingy rules on green tickets.

Democratic Bulgaria’s Borislav Ignatov saw the main problem of Sofia as corruption. He said so at every given opportunity, and every ungiven one. When debate reached air quality (it took 41 minutes to get to this point, which many may argue was too long), he described it as the “elephant in the room”. Ignatov may be a warrior in the fight for pure air in Bulgaria’s capital, but he is a deserter in the war against cliché. In his closing remarks, he underlined that he was against corruption, but in favour of digitilisation. In short, that latter point meant services for citizens at the click of a smartphone. When we’re not watching Hilarious Cat Fails, that is.

Dzhambazki had many points to make about public transport, including that there are parts of Sofia that will need to rely on buses because geological conditions make digging a metro not viable. On air pollution, he emphasised the favourite sideswipe against Bulgarian ultra-nationalists’ Aunt Sally of choice, Roma people. Sofia’s poor air quality, he argued, resulted from illegal waste burning in illegal settlements by gypsies, Dzhambazki said, using the Bulgarian equivalent word. In his closing remarks, he promised a Sofia with no “propaganda, parades, strategies, ideologies” – exhausting the entire lexicon of the code language of intolerance. His Sofia, he said, would be one of law, order and discipline, and no gay parades. I would shoehorn in a kitten reference here, but Dzhambazki does not deserve it.

Meanwhile, if anyone cares, there is something to record here, about Ataka leader and Sofia mayoral candidate Volen Siderov, one of the 16 rated by Alpha Research as numbering among “other”.

You may recall that Siderov caused a furore in a previous broadcast of Referendum, causing BNT to ban him. The Central Election Commission effectively upheld that ban, but the Supreme Administrative Court said that the CEC was wrong to do so, because it had failed to put forth legal grounds. In a decision posted late at night on October 14 (it would be mischievous to suggest that this was in the hope few would notice), the CEC responded to Ataka with magnificent finesse.

It said that the matter of Ataka’s demand for Siderov to be included in Referendum was a matter of the contract between BNT and the political parties. The CEC said that this was a matter of a contract to which it was not a party, and for the parties to that contract to resolve between them. Washing its hands of the business, it said that its decision was not to make a decision, and that this decision (or lack of one) was a matter for appeal, should any party feel so inclined, in the Supreme Administrative Court, within three days. On October 15, Ataka issued a statement calling on the CEC to ban this evening’s broadcast of Referendum, which quite obviously it did not, otherwise some of us would have been watching kitten videos.