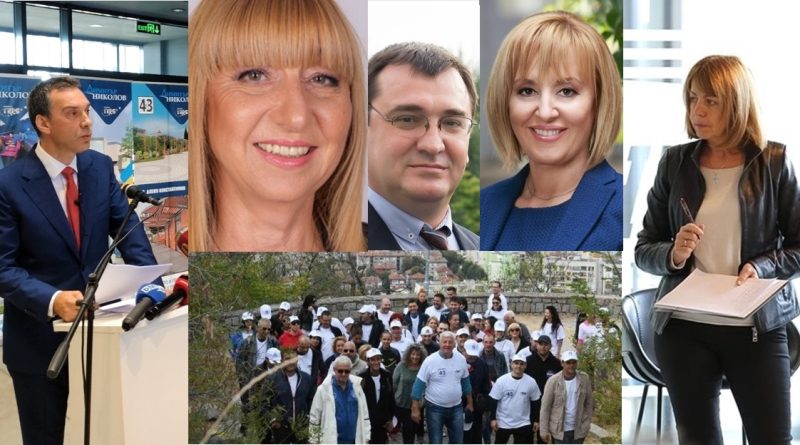 Campaigning ahead of Bulgaria’s autumn 2019 mayoral and municipal elections is at its midway point, with two more weeks to go, and the many thousands of candidates are criss-crossing the campaign trail.

Among the five major cities, let us begin in Plovdiv, only because I love that city very much.

There was even a sermon on the mount, so to speak, as GERB mayoral candidate Zdravko Dimitrov ascended the Hill of Youth, accompanied – appropriately and pointedly – by about 100 youths. Dimitrov’s sermon, sorry, speech, was on the theme of his vision of a greener Plovdiv.

Plovdiv, he said, is the oldest living city in Europe. “Together, we have to make it the greenest and most attractive”.

His main rival, Slavcho Atanassov, the candidate of two ultra-nationalist parties, was not to be outdone on the green front, signing a memorandum on the development of a “green system” for Plovdiv, put forward to all mayoral candidates by the union of landscape architects.

In the course of the week, Zdravko Dimitrov visited his old school, the Vassil Levski Sports School, which was celebrating its 70th birthday. He paid tribute to his teachers and said that, had he again to choose attending a school, it would be this one. It is a school that puts one on the path to success, he said, with perhaps something of a hopeful note.

Atanassov pledged that were he to return as Plovdiv’s mayor (he held that post from 2007 to 2011, before being defeated at the hands of GERB), he would revive the mayor’s expert council, which he said would have nine expert groups, on matters such as science and education, transport, and yes, the environment. Separately, he held forth on Plovdiv’s potential to win millions of euro for cultural projects.

Dimitrov, however, had the endorsement of Bulgaria’s former football great, Plovdiv-born Hristo Stoichkov, who recorded a video message saying all sorts of nice things about him. Stoichkov also did one for Ivan Portnih, the incumbent mayor of Varna who is seeking a further term in office, on a GERB ticket.

In Sofia, there were some notable episodes regarding the campaign of Maya Manolova, the former national Ombudsman who is standing as an independent on a ticket backed by the opposition Bulgarian Socialist Party, among others.

Her campaign tent near the National Palace of Culture was vandalised and in a more bizarre episode, someone plastered cars with “Manolova” stickers. One of the cars thus plastered was that of a close relative of Manolova. She alleged the move to be intended to discredit her, and darkly hinted that this was the work of her main opponent.

This prompted a special news conference by GERB, the party backing incumbent mayor Yordanka Fandukova for a fourth term.

The leader of the GERB group in the city council, Malina Edreva, said that the party was “genuinely angry” at the way Manolova was running her campaign, and described her as the candidate of backstage deals, behind whom stood the team of Plamen Oresharski, the former finance minister who sat in the prime minister’s chair in 2013 and 2014.

“We are forced by Manolova to deal with patches on cars, tents, manipulations, lies. It is not fair to distract from important issues,” Edreva said. “It is not fair and we will not allow ourselves to be included in another backstage scenario,” she said.

Manolova, meanwhile, was hoofing the campaign trail, speaking on the topic of the central mineral baths in Sofia, which she said should again become a baths (“It is criminal not to use mineral water”), promising to deal with the shortage of kindergartens, and meeting, in the words of a media statement, the “intellectual elite” to “hear their ideas on how the cultural environment in the capital could change in a more positive direction” (the general thrust appeared to be that this could be achieved by getting rid of Fandukova).

Manolova posted on Facebook a video message for the Bulgarian Jewish community, on the occasion of Yom Kippur, the holiest day in the calendar. “On this most sacred day for you, I wish all of the community, families, children, loved ones and parents health, high spirits and bright thoughts. Your community is a significant part of Bulgarian society, with a contribution we all value highly. I have many friends in this community. May your holiday be bright and your souls full of warmth,” she said.

Fandukova, meanwhile, spent the week with a torrent of statements on infrastructure projects, on the extension of Lomsko Chausse Boulevard to the Sofia Ring Road, on completing the restoration of the mineral baths in Bankya and beginning the restoration of the baths in Ovcha Kupel and Gorna Banya, on plans for new schools in the Malinova Dolina residential area and in Studentski Grad.

Endorsements were conferred on Fandukova, from the Confederation of Independent Trade Unions of Bulgaria, one of the country’s two large trade union federations, and from Petar Stoyanov, who was President of Bulgaria from 1997 to 2002.

“I very much want Sofia to have mayor Yordanka Fandukova again. I like her mastery, restraint and balance. This is important for a person who rules such a big city as Sofia.

“It is important for me that Sofia has a mayor who you know what to expect. And she says that – you can’t promise everything. A politician must have integrity. It’s not just about winning the election,” Stoyanov said, describing Fandukova as predictable, and as someone who could be expected not to be mean nor to betray her principles. “This is extremely important,” he said.

In Varna, mayor Ivan Portnih does not appear to be putting much into campaigning at the moment, but his socialist rival Anelia Klisarova is verging on the hyperactive.

Klisarova said that Varna was like a person who was beautifully wearing cosmetics, but ill inside.

In attack mode, she said that it was no secret that tenders in the Black Sea city went only to a few companies, while in the past two years, about 70 medium-sized companies in Varna had gone bankrupt.

“Nobody talks about underground infrastructure. There are neighbourhoods without sewerage, neighbourhoods that are being built up indiscriminately – without a common vision and a preliminary plan for construction,” Klisarova said.

“Both pavements and small broken streets, outside the major thoroughfares, need to be repaired. More attention should be paid to refuse collection and cleanliness of the city”.

Klisarova said that the first thing to do for cleanliness is to set up a municipal waste management company. In this way the local administration would be able to directly control the activity and to react quickly and adequately in case of problems or violations.

GERB MP and former Constitutional Court judge Georgi Markov was in Varna on October 8, to endorse mayor Portnih. Actually, Markov was there to promote his new book, but took time to say sweet things about the GERB mayor.

“Thanks to Ivan Portnih our sea capital has been changed and modernised, Varna is a true European city,” Markov said.

In Bourgas, mayor and GERB candidate Dimitar Nikolov harped on the theme of the best being yet to come.

Presenting a large-scale management programme for the seaside city, Nikolov said: “I have the strength, the ideas and the confidence to build on what we have achieved and to move forward together. The years ahead are key to the development of our city. My goal is even more successful, modern, intelligent, desirable as a place to live and work in Bourgas.

“I know what the citizens of Bourgas expect from me – less talk and more work,” Nikolov said. Should the electorate choose him, he said, implementation of his programme would begin on October 28 – the day after election day.

Tishev said that in meetings in various places in the municipality, people had complained the most about poor infrastructure and the problems of intercity transport. Young people in Bourgas complained mostly about low pay and lack of prospects. “These are part of our priorities and we intend to implement them after the elections,” Tishev said.

In Rousse, Bulgarian Socialist Party candidate Pencho Milkov said that he wanted the city to be an “innovative city”.

“I want to see Rousse again as one of the greenest and cleanest cities in Bulgaria, again attractive and eager for life, work and business,” Milkov said in a radio debate.

He explained that despite the big projects that had been started, there were many problems facing the city. “I think it takes energy, unity, professionalism and honesty to solve them and I believe I can handle it,” he said.

Milkov outlined three important topics that are of great importance for making Rousse a modern, stable and attractive city. These were, he said, clean air, improving the infrastructure of the city and overcoming the permanent and rapid depopulation of Rousse.

“Cleanliness of the air and the environment is of paramount importance,” Pencho Milkov said.

According to him, the truth about the companies that pollute the air has not been told to the people of Rousse for years.

GERB, meanwhile, with some fanfare announced that its candidate to be mayor of Rousse, Diana Ivanova, had received an award for her work as head of the vocational apparel high school in the city, the annual award in the category “head of a training institution”.

Earlier in the week, GERB held a meeting to present Ivanova and its city council candidates, saying that the venue had been “overcrowded”.

“I will focus my efforts on combating the depopulation of the city, upgrading a functioning administration to serve the citizens, creating a link between education and business and the municipality and addressing major environmental problems. It is clear to all that when we have an answer and a solution to the problems of the people, a good business environment and a clean city – Rousse will be an even more attractive place to live,” Ivanova said.

“I can build, I can build bridges and bring people together. Seeing you all so anxious in the development of our cause, I am hopeful and this gives me additional strength because we have a lot of work to do for Rousse,” she said. 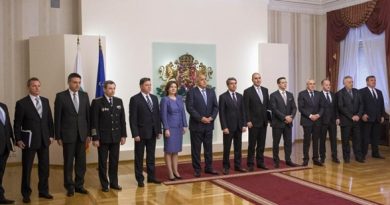