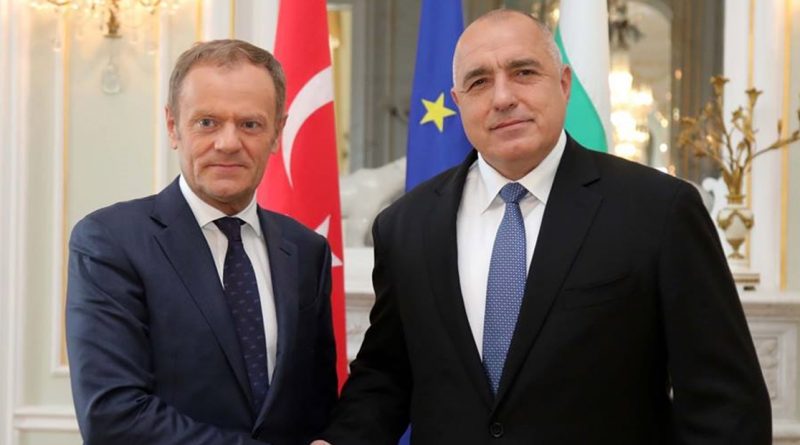 European Council President Donald Tusk has told Bulgarian Prime Minister Boiko Borissov that his idea of holding the EU -Turkey summit in Varna as an opportunity to re-establish dialogue with Turkey is “great and is highly appreciated by all with whom I have been discussing it,” according to a Bulgarian government statement.

Tusk and Borissov held talks on March 26 ahead of a working dinner that will see, with Borissov as host, a delegation headed by Turkish President Recep Tayyip Erdoğan sit down with EU leaders including Tusk, European Commission President Jean-Claude Juncker and EU foreign policy chief Federica Mogherini.

The working dinner will assess matters of mutual interest and recent developments in Turkey, including the country’s illegal actions in the Eastern Mediterranean and the Aegean Sea and its involvement in Syria, a European Council statement said.

Erdoğan will be bringing to the table demands including, among other things, the receipt of promised billions of euro in an EU funding package to held Turkey cope with millions of Syrian refugees, and a demand for the re-start of talks on his country’s EU accession.

Hopes are not high that the Varna EU-Turkey leaders’ meeting will see any significant agreements, though the optimistic view is that it will  – perhaps at most – send a signal of continuing dialogue in spite of the deterioration of relations between Ankara and the bloc.

Borissov, whose country currently holds the rotating Presidency of the Council of the EU, said that for Bulgaria, it was important to have good relations with its neighbouring country.

“Good relations are also important for the EU because of the overcoming of the migratory flow, which has created many problems for the Union in recent years,” Borissov said.

Two hours before the start of the dinner, Borissov is to hold talks with Erdoğan.

Bulgarian head of state President Roumen Radev, who is not involved in the Varna event, was at a March 26 ceremony in Sofia to commemorate the Battle of Edirne in the Balkan Wars, and told reporters he hoped that Borissov would raised with Erdoğan the question of compensation for descendants of refugees displaced from Eastern Thrace at the time of the Second Balkan War in 1913.

News agency BTA quoted Radev as telling reporters that seeking a solution to the question about the compensations “is not an anachronism but part of the contemporary European take on history in the spirit and practice of today’s international politics”. “The killing, persecution and ruin of the Thracian Bulgarians is a bitter lesson which we must not forget,” said Radev, who frequently is at loggerheads with Borissov’s government. Radev has been head of state since January 2017 following his election on a ticket backed by the opposition Bulgarian Socialist Party.

French, UK human rights organisations speak out against bid to extradite Koblyakov from Bulgaria to Russia