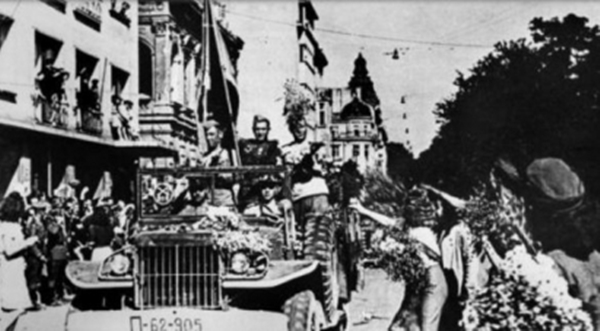 In an annual ritual, Bulgaria’s political forces are again deeply divided over the September 9 anniversary of the Soviet invasion of the country in 1944, with some seeing it as an occasion for celebration and others as a time for mourning.

Under King Boris III, Bulgaria joined Hitler’s Axis in March 1941, in return being handed territory in Romania, Yugoslavia and Greece. Later that year, it declared war on the United Kingdom and United States, but did not declare war on the Soviet Union.

In August 1944, as the impending defeat of Nazi Germany became obvious, Bulgaria declaredbee neutrality in the Soviet-German war and said that German military should leave Bulgaria. On September 5, the Soviet Union declared war on Bulgaria. Three days later, as the Soviets crossed into Bulgaria, the country said that it was now allied to the Soviet Union in its war on Germany.

The September 9 communist takeover ushered in decades of a regime that first carried out “People’s Court” trials that, in addition to murders amid the coup d’etat, meant many thousands of deaths of monarchist-era politicians, intellectuals, police and military officers, local officials and priests. This regime held Bulgaria in its grip until the end of the Cold War.

On September 8 2017, on the eve of celebrations planned by the Bulgarian Socialist Party – lineal successor to the Bulgarian Communist Party – Prime Minister Boiko Borissov’s centre-right GERB party and the Union of the Repressed by Communism held a joint briefing, condemning the plannned celebrations.

GERB MP Toma Bikov said that September 9 was a day to commemorate the memory of those who had been killed in the 1944 coup.

“Beyond this, we remember this day because it took Bulgaria off the road that it had walked from the time of the national revival,” Bikov said, adding that people had died, hundreds of thousands had been subjected to unjust repression and millions had spent their lives in a closed state, with no chance to fulfil themselves as true Europeans.

The assessment of September 9 had been given by the Bulgarian Communist Party, which 45 years after 1944 had taken down its regime, changed its name and its leadership.

Bikov said that, unfortunately, in recent years there had been a tendency to not recognise the crimes of the Bulgarian communist regime.

“They have never been recognized openly, but there is a tendency to return to the principles of an ideology that denies and aims to destroy traditional national values ​​and lay the foundations of new religions without national identity and without a family. That’s what Marx says. That is why we judge not the sinners, but the sin of this misanthropic ideology, which is contrary to all the traditional values ​​of all societies,” Bikov said.

GERB’s Anton Todorov said that September 9 was perhaps the worst day in Bulgaria’s history. After that date, Bulgaria was subjected to a total dictatorship and its ruling elite had been appointed directly by Moscow.

The head of the Union of Repressed by Communism, Lili Drumeva, said that the Bulgarian Socialist Party was the heir of the communist oligarchy.

“I invite everyone for whom this dark date September 9 means much, to go out and to show by their attitude and their behaviour, a procession against those who want to magnify this date and to make us forget,” Drumeva said.

A rally against the time of the communist rule is expected to be held in Bulgaria’s second city Plovdiv at noon on September 9 on Stefan Stambolov Square.

Over the past few days, local organisations of the BSP, in Dobrich, Shoumen and Gotse Delchev, have announced celebrations on September 9.

“September 9 symbolises the contribution of the Bulgarian resistance against fascism. This date ensured the reorientation of Bulgaria, an ally of Nazi Germany, into a country that fought on the side of allied nations,” BSP MP Yanaki Stoilov, said in declaration read in the National Assembly in 2015.

“In the decades after September 9 1944, Bulgaria reached the Top 30 countries in the world according to the Human Development Index and its economic capacity. Today we are comforted that we are in the EU, although we are in last place in it,” the BSP said.

He said that after 1989, people had been forced to deny and then to forget that everyone had had “work, a home, security and guaranteed health care, universal education and a society without drastic social inequalities.”

In Bulgaria, the years after 1989 saw a bitter contest among politicians, historians and others over perspectives on Bulgaria’s Second World War history.

Among the disputes was that over the 1943 prevention of the deportation of Bulgarian Jews to Nazi Holocaust death camps, although the Bulgarian government did not prevent the deportation and murder of more than 11 000 Jews from territories in Yugoslavia and northern Greece that were under Bulgarian administration.

In the light of archives and numerous recollections, the prevention of the deportations from Bulgaria is seen as largely due to the work of the Bulgarian Orthodox Church’s Holy Synod, politicians such as then-Deputy Speaker Dimitar Peshev, several professional associations such as those of lawyers, doctors and writers, prominent intellectuals and many ordinary people.

However, at the time of communist rule, the regime claimed credit for itself, ascribing a “leading role” to the Bulgarian communists, and making no mention of the church, non-communist politicians and civil society. It also made no mention of Boris, though today he remains a figure of dispute, between those who ascribe to him a heroic role and those who reject this claim.

Core to the dispute is the necessity for left-wingers to want to underline the image of Boris’s regime as fascist and pro-Nazi, to lend credence to the events of September 1944 as a liberation. Boris III died in August 1943, soon after a meeting with Hitler. Those who take a favourable view of him say that Boris was murdered because of his resistance to Hitler’s demands for the deportation of the Jews and for Bulgaria’s military to join the campaign against the Soviets.

Apart from the Second World War, there is a continuing debate on dealing with the recent past, meaning, the communist regime. In recent years, political figures such as then-President Rossen Plevneliev repeatedly called for Bulgaria’s youth to be educated fully and frankly about the totalitarian regimes.

In the NGO sector, the Sofia Platform Foundation, backed by the America for Bulgaria Foundation, initiated extra-curricular programmes to educate the youth about the pre-1989 past.

The Dossier Commission, created by Bulgarian statute in 2006, is empowered by law to announce who in contemporary public life worked for the country’s communist-era secret service State Security. Thousands of names have been announced, in politics, the media, business associations, trade unions, opinion polling agencies and Christian, Jewish and Muslim religious leaderships. By Bulgaria’s constitution, lustration is not permissible, so these announcements represent no legal bar to State Security people continuing in their respective walks of life.