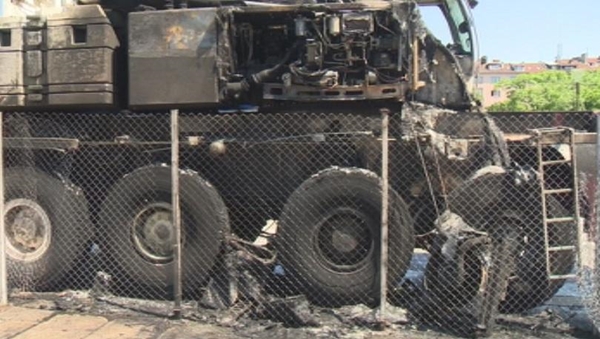 A fire at a giant crane in the early hours of July 9, in what was suspected to be an arson attempt, has halted work on the dismantling of the controversial “1300 Years of Bulgaria” monument near the National Palace of Culture, NDK, in Sofia.

The fire was reported soon after 3am. It was extinguished quickly but damage to the crane was considerable.

Police are pursuing several lines of inquiry, among them arson. Unconfirmed media reports said that Molotov cocktails were used to start the blaze.

Sofinvest, the municipal company that hired the crane, said that the initial estimate of damage was a million euro. The insurance company is working on a more precise damage assessment.

According to the company, the crane is practically unusable and another one will have to be brought in to continue the dismantling of the monument. 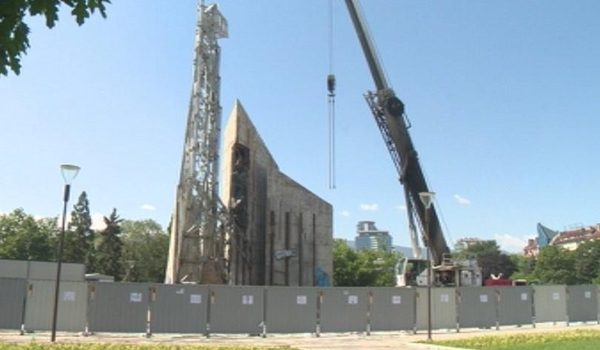 Ivailo Ivanov of the Sofinvest company said that another crane would be required to remove the fire-damaged crane. The replacement crane would then continue the work of taking the monument apart.

He estimated that this process could begin in about a week.

The “1300 Years of Bulgaria” monument was unveiled in 1981, during Bulgaria’s communist era, after just eight months of construction. It was the work of architect Georgi Stoilov and sculptors: Boris Gondov, Todor Vardzhiev and Emil Mirchev.

The 35 m-high monument consisted of three upright reinforced concrete sections faced with polished granite tiles, graded in height and adorned with bronze sculptures and inscriptions, representing the golden age of Bulgarian culture, the struggles for national liberation and socialism, and the country’s present and future.

After the beginning of Bulgaria’s transition to democracy, the monument was neglected and has deteriorated into a crumbling and potentially dangerous state.

Sofia municipality took a formal decision in 2014 to remove the monument, but the procedure was delayed because of several appeals in court.

The future of the monument has been a divisive issue, with some demanding that it be sent to the scrap heap, while others have appealed for it to be restored, either for reasons of political nostalgia or because they feel that obliterating it would be an irrational denial of part of Bulgaria’s recent past.

The process of dismantling began in recent days, attended by protests against the process by several organisations, including left-wingers, as well as members of the Union of Bulgarian Artists and the Union of Architects.

Bulgarian National Television, in a report on July 9, noted that the burnt crane had been in the news before in recent months – it was used to remove rolling stock from the train that was destroyed in the Hitrino gas tank explosion. 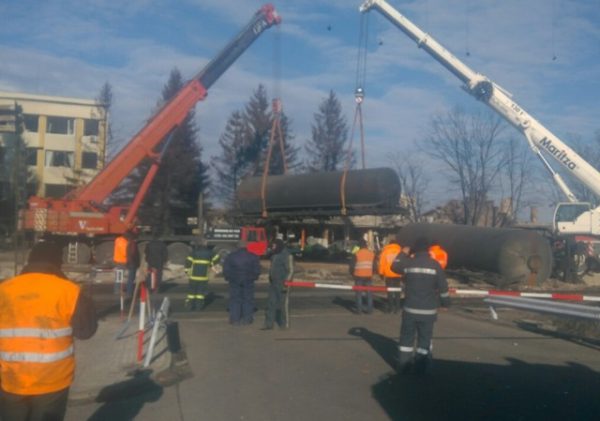