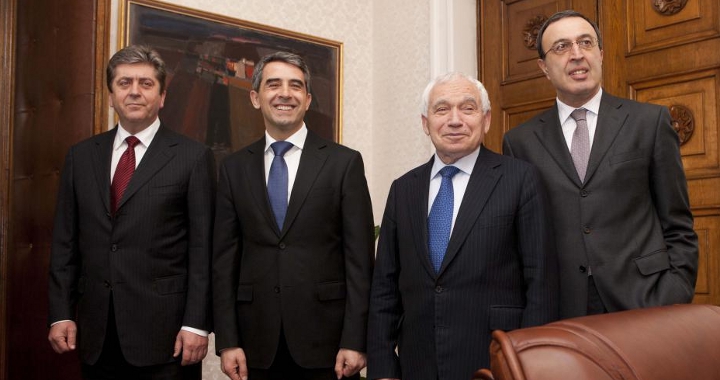 Bulgarian President Rossen Plevneliev hosted the first meeting of the “council of presidents”, an informal meeting with his predecessors, on January 22, the first anniversary of taking office.

The current head of state and three former ones “discussed significant public processes and the execution of long-term national priorities,” the presidency’s media service said in a statement.

“It is an exceptional honour for me to use the experience, hear the wise words and be together with Bulgarian statesmen. Each of them has an enormous contribution to the state’s development and certainly worked hard and made mistakes – I will be no different,” Plevneliev said. “We do not share the same opinion on all matters, but that is the signal we are sending – each Bulgarian president has his battles and priorities, but we have a common cause and topics on which we can seek solutions together.”

The council is set to meet every year on January 22, but it should not be viewed as a “council of elders” or “secret centre of power”, rather an occasion to meet and discuss informally “as people who work for Bulgaria,” Plevneliev said.

(Left to right: Georgi Purvanov, Rossen Plevneliev, Zhelyu Zhelev and Petar Stoyanov. Socialist Purvanov, as well as Plevneliev and Zhelev, both elected on tickets of centre-right parties, proudly showed their colours with the choice of ties. Stoyanov, who was elected on the ticket of a centre-right party, chose a neutral grey – possibly hinting at his refusal to become involved in domestic politics in favour of his international commitments, the same reason he gave when he declined a nomination to sit on Bulgaria’s Constitutional Court when offered last year. Photo: president.bg)