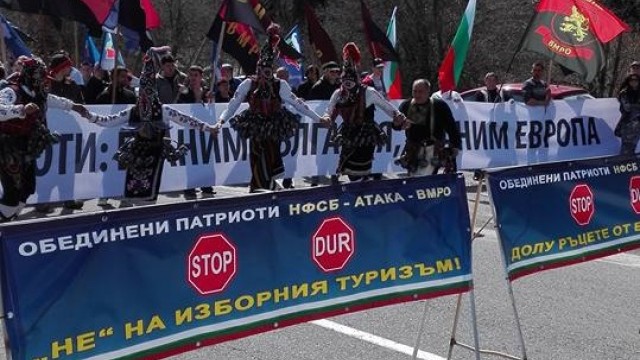 Bulgarian nationalist protesters against “electoral tourism” – the bussing-in of Bulgarian passport-holders from Turkey to vote in the March 26 elections – blocked the border checkpoint at Kapitan Andreevo on Friday.

Bulgarian National Television reported that as bus traffic at the Turkish border was obstructed, passengers got off the buses and walked across the border.

There was an increased police presence at Kapitan Andreevo but the situation was calm, the report said.

The nationalists said that their “blockade” would continue until 11pm on Sunday, election day.

There have been numerous reports in recent days of large numbers of passengers arriving in Bulgaria from Turkey on non-scheduled buses. Reports have said that these buses have been hired by a political party.

Participants in the nationalist protest told reporters: “We Bulgarians living in the country should decide the fate of Bulgaria, not people who live elsewhere and come here only to vote”.

The protesters said that at night, they would camp in tents put up between the incoming and outgoing lanes at the Kapitan Andreevo checkpoint.

At the Malko Turnovo checkpoint, 27 additional – non-scheduled – buses have crossed into Bulgaria since the beginning of the week, Bulgarian National Radio said, adding that most passengers were carrying leaflets of one of the parties competing in Sunday’s National Assembly election.

At Malko Turnovo, protesters arrived in two buses, a van and six cars. They carried a banner reading “Defend Bulgaria, Defend Europe”. The group sang patriotic songs, while a group of kukeri – Bulgarian mummers – performed a ritual of chasing away evil spirits.

About 100 police and gendarmerie were guarding the protest, the report said.

Police commissioner Nedelcho Rachev said that the law enforcement officers were there to prevent incidents and would not hinder the protest unless the participants broke the law. The organisers of the protest promised that there would be no escalation of tensions, BNR reported.

At the Lesovo border checkpoint, there were about 50 protesters, reporters at the scene said.

Elhovo mayor Petar Kirov withheld permission for the rally, so protesters were standing in a parking area next to the roadway.

At Lesovo, the queue of lorries at the checkpoint was about two km long, which is about the average for the time of day and week.

Bulgaria’s 2017 elections: Reports received of voters being bussed in from Turkey – deputy PM 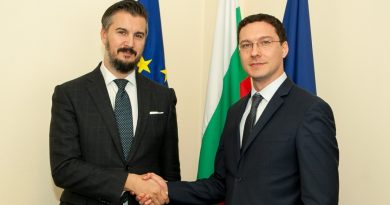