A year ago, nearly to the day, Russian President Vladimir Putin was announcing, during a visit to Ankara, that the South Stream gas pipeline would be re-directed, making landfall in Turkey rather than Bulgaria, and not-so-subtly threatening the EU that it would be at Ankara’s mercy when it came to gas supplies.

Fast forward to December 3 2015 and Energy Minister Alexander Novak’s announcement that work on Turkish Stream has been halted will have been greeted with satisfied smiles from naysayers who had expected this very outcome.

Although the announcement is being framed as part of the sanctions imposed by Moscow on Ankara for the downing of a Russian Su-24 military jet last month near the border with Syria, the reality is that little had been accomplished on the project in the year since Putin’s visit to Turkey, so Russia can afford this bit of sabre-rattling at no cost (beyond the billions already sunk into expanding its gas grid infrastructure to deliver the gas to the starting point of the pipeline).

Putin and a host of Russian experts toting the Kremlin’s line spoke at length how the onus was on the EU to keep Ankara happy or risk having the “gas valves” shut off – a curious choice of words, given how Russia has slammed Ukraine as being “an unreliable transit partner” as soon as Kyiv drifted out of Moscow’s sphere of influence.

Perhaps mindful of that very fact, Turkey focused its attention on getting a tangible benefit, namely a steep gas discount from Gazprom, rather than settle for the promise of large transit fees (unlike Gazprom’s apologists in Bulgaria). Months of talks yielded little in the way of results, as Gazprom can scarcely afford to cut prices too much because its bottom line is already suffering from the prolonged slump in oil prices, which serve as the basis for its pricing formula.

Unsurprisingly, a project that was seen by many as politically-motivated, since its main justification was to bypass the existing transit route through Ukraine, was cut off at the knees by economic reasons.

Gazprom’s reluctance to give in to Ankara’s demands may cost the company in the long term. The coming glut of liquefied natural gas in just a few years’ time, thanks to the large number of projects already under development, as well as the plentiful supply in the US as a result of the “shale revolution”, could give Turkey a lot of options, while Gazprom may see its second largest foreign market dwindle in size.

For all the bullish talk from Russia, Turkish Stream was always a long shot, and was dismissed as such by the EU, but another project may pose a much bigger challenge – the expansion of the Nord Stream pipeline.

Gazprom refuses to play by EU’s rules, insisting that it should own the pipelines and use them exclusively (although it is probably justified in thinking that those rules had been drafted specifically to limit the company’s influence), which is why the Nord Stream project must be so appealing – it still accomplishes the goal of bypassing Ukrainian transit while also ignoring EU regulations because, unlike South Stream, it would not cross the territory of any EU member state.

To the European Commission, this will be a real issue, as 10 member states from Eastern Europe have made their opposition known in a letter they sent last month. Add the fact that Gazprom is partnering with five Western European companies to build the Nord Stream expansion and it is easy to see how that would give rise to talk about double standards in Brussels – a development that, whether it was intended that way or not, would be welcomed by the Kremlin, which has sought to cause as much division as possible in EU’s ranks after it found itself the target of European sanctions over the Ukrainian crisis. 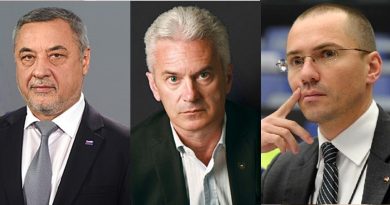