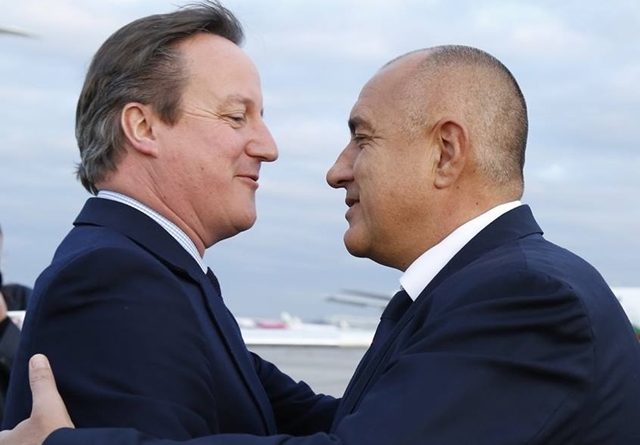 Cameron’s visit, the first to Bulgaria by a UK prime minister in 16 years, came on the same day that Downing Street confirmed that he did not expect that the December 17 and 18 European Council would see agreement on renegotiation of the terms of the UK’s membership of the EU.

Before his talks with Borissov, Cameron spoke on the phone with German chancellor Angela Merkel, with a Downing Street spokesperson saying that the British and German leaders agreed that good progress had been made since the prime minister’s letter to the President of the European Council “but that there remain difficult issues to resolve”.

Cameron noted that the scale of what his government was asking for means “we will not resolve this in one go and consequently he did not expect to get agreement at the December European Council. Instead, we should keep up the pace of discussions and use the summit for a substantive discussion of the proposed changes in each area”.

At a joint news conference with Borissov after their talks, Borissov said that he would like to work on issues such as sovereignty, governance and the economy, adding that later this month, there would be an opportunity to discuss them. There should be basic and legally binding agreements, he said.

On the issue of migration, Cameron – who is due during his visit to Bulgaria to visit the EU member country’s border with Turkey and apparently also will see Bulgaria’s sea border – said that the question was how to strengthen the external borders of the EU.

The UK had an important part in all these issues, Cameron said. He added that he and Borissov had discussed the terrorist threat, and he told the news conference that on this issue, a stronger exchange of information was needed.

Cameron paid tribute to what he called the good results achieved by Borissov as Bulgaria’s prime minister, underlining that the relationship between the UK and Bulgaria was “important for our security and prosperity”, and noting joint training by the UK and Bulgarian armed forces, as well as how bilateral trade relations had increased by nine per cent.

Borissov expressed hope for continued support from the UK, especially through the EU Cohesion Policy, adding that cohesion funds were important because they increased competition and business opportunities in the region.

The Bulgarian Prime Minister said that his country was doing well, and the UK had noticed this, on issues such as securing the Schengen external border and managing the budget deficit.

After his talks with his Bulgarian counterpart, Cameron went to a meeting with head of state President Rossen Plevneliev and also was to be shown Sofia Tech Park.

Cameron’s official visit to Bulgaria came on the day after he won a House of Commons vote on British military action in Syria, a vote that was followed by Royal Air Force strikes on Daesh targets. The UK prime minister’s visit was accompanied by especially tight security, with his motorcade travelling through cleared streets escorted by a phalanx of police and security vehicles.