Do you remember Herman Van Rompuy? You don’t even remember the name? The Belgian was the first president of the European Council. The fact that he served in the post for five years didn’t make him well known in Europe and hardly at all in the rest of the world. As his successor, the Pole Donald Tusk, who prepares to celebrate his first year in office Tuesday, appears to share the same fate. He has kept a low profile despite having called and managed many EU summits and emergency summits on various deadlocks and crunches. “Tusk is very withdrawn, both on the Brussels stage, as well as outside Brussels,” said Janis Emmanouilidis, of the European Policy Centre think tank. “He doesn’t express his viewpoints on how things should go forward in the European Union. He doesn’t make speeches.”

Tusk resigned as Poland’s prime minister to go to Brussels after seven economically successful years in office. This was seen as a new rung on the career ladder. In Warsaw circles a year ago, it was said that Tusk was weary of office and had calculated his move to Brussels at an opportune time. Things were no longer working out that well for his liberal-conservative Civic Platform. He was increasingly encountering headwinds in Poland. And it appears that Tusk made a good move for himself: In October, the right-wing Law and Justice party won elections, pushing out Ewa Kopacz, his friend and short-lived successor as prime minister.

He headed to Brussels with big plans and also faced heavy expectations. German Chancellor Angela Merkel, who endorsed Tusk and his ambitions, praised him as a committed European. Tusk considers Merkel a “close political friend.” He started his first year with his feet to the fire: civil war in Ukraine, Greece’s standoff with its international creditors, the arrival of hundreds of thousands of refugees, and two sets of terror attacks in Paris.

Tusk’s critics in the European Council and the European Commission, the most powerful institution in Brussels, say he still hasn’t completely arrived in his office. “He’s very shy,” one diplomat said. “In the euro crisis, he could not keep pace with EU Commission President (Jean-Claude) Juncker, who is more experienced.” At least Tusk, in contrast to Juncker, was there as mediator when Merkel and Greek Prime Minister Alex Tsipras negotiated a deal at their dramatic debt summit in July.

But Tusk doesn’t really have any institutional power, which is unusual for a former prime minister. He is like an honorary chairman of the 28 EU member states who works in the background, silently achieving compromises – that is at least what it was like under Van Rompuy. Well ahead of other European officials, Tusk had warned that the Schengen zone, which guarantees travel within Europe without border controls, was in danger of collapsing. “Saving Schengen is a race against time, which we want to win,” Tusk said in mid-November, with a view to clamping the European Union’s external borders as refugees continued to arrive. But it wasn’t until Juncker and Merkel said the same thing two weeks later that such statements made headlines. Tusk might say the right thing, but people don’t necessarily notice.

“I too frequently present my own views,” a self-critical Tusk had told the US website Politico in summer.

Not a happy role

Tusk has also had great difficulty keeping the European Council unified when it comes to refugees. He could not push through quotas to distribute people among the 28 states. Juncker and Italian Prime Minister Matteo Renzi were furious – and loudly so. “Disputes belong to the trade now and again,” Tusk said. A few summits later, Juncker started calling sessions himself – a right that is generally reserved for the president of the Council, not the chief of the Commission. Still, the European Policy Centre’s Emmanouilidis said, Tusk has not taken a balanced role when it comes to refugees: “He has a tendency toward the security aspect and less in the direction of ‘we can do this and have to do it.’ He doesn’t stand on the side of Chancellor Merkel, which has led to a lot of criticism.”

“Donald Tusk is still looking for his place,” one EU diplomat said. He doesn’t have a lot of time to find it, however. His term ends in June 2017. Until then he has to deal with increasingly strong calls for renationalization within the European Union, above all the clamor coming from increasingly recalcitrant Britain. Tusk used to have good relations with UK Prime Minister David Cameron from their days as national counterparts. But now, after many personal conversations with Cameron, Tusk has come to realize that the prime minister wants to push through a radical reform of the EU with British gusto. Tusk is against this. It seems almost counterproductive to massively renegotiate standing EU treaties in light of the many more pressing matters and increasing Euroskepticism in Central and East European member states, including Tusk’s own Poland.

Tusk has learned at least one thing very well in his first year as president of the European Council: the English language. Friends and critics alike praise how quickly Tusk picked it up. He could already speak German. No one has heard him speak French. The 58-year-old father of two is physically fit and slim. He jogs 10 kilometers (6 miles) three times a week. After having taken a bit of time off to nurse an injury, he wants to start playing soccer again soon. Tusk says his greatest passion is teaching his grandchildren how to play football. In his private life, as in his long career from Solidarity activist to European Council president, Donald Tusk is tough; he has endurance. 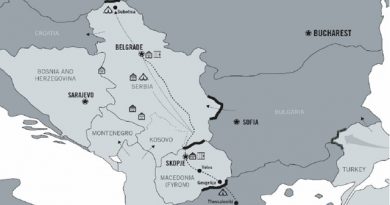