Bulgarian head of state Rossen Plevneliev has described the October 25 national referendum on electronic voting as an indisputable success and proof that citizens want to participate actively in decision-making in the state, while slamming political parties for their inertia towards the issue.

He also disclosed that he had asked the State Agency for National Security to investigate the hacker attack that confounded the working of the Central Election Commission website on election day, and said that he saw the attack as an attempt to discredit the idea of online voting.

Plevneliev was speaking on October 30 at a briefing broadcast live on radio and television, two days after the Central Election Commission said that 69.5 per cent of those who voted were in favour of introducing electronic voting in future elections and referendums, and 26 per cent voted against, with the remaining 4.5 per cent of ballots declared invalid.

However, the outcome of the referendum does not bind Parliament to vote in line with the result, because at 39.7 per cent, voter turnout failed to clear the 48.7 per cent threshold to make it binding. Because turnout did exceed 20 per cent, the National Assembly will be required to debate the issue, although it can decide to make no changes to the status quo.

Plevneliev, in office as President since January 2012, has long been campaigning for referendums on electoral referendum. His attempt, in parallel with a civic petition of more than 500 000 signatures to call a referendum in issues in electoral reform, was rejected by the now-departed parliament at the time of the 2013/14 ruling axis of the Bulgarian Socialist Party and Movement for Rights and Freedoms, which was held in place by extremist party Ataka.

Plevneliev put to the Parliament elected in October 2014 proposals for a three-question referendum along with the municipal elections, the questions being on the introduction of a majoritarian element in the election of legislatures, the introduction of compulsory voting and of online voting. Only the last of three questions was accepted, in a Parliament in which the largest party that is the same one that nominated Plevneliev for the 2011 presidential election.

He told the October 30 briefing that the referendum had not been about the President, nor about a group of citizens who wanted to introduce electronic voting.

Bulgarians had voted massively and had shown that Bulgarian civil society was far ahead in development development than those pretentiously declared part of the political elite.

Should those in power ignore the results of the referendum, this would be a “huge political mistake,” Plevneliev said.

He emphasised that 1.8 million Bulgarians had, in the referendum, supported electronic voting. It showed very clearly how many people were behind the idea of changing the political system. He underlined that while the first call for a referendum in 2013/14 had been backed by a petition of 500 000, this time there were 1 800 000 Bulgarians who had expressly voted in favour of electronic voting.

Plevneliev appealed to the National Assembly to use the “rare chance” handed to them by citizens to improve the electoral process and Bulgarian democracy as a whole.

He said that “provocative and scandalous” actions by politicians to mar efforts to promote democracy should be avoided.

Plevneliev said that the hacker attacks on election day were the “new Kostinbrod”. This was a reference to an episode on the “day of contemplation” ahead of the 2013 parliamentary elections in which certain media and politicians alleged that there were additional ballots in stock to aid Boiko Borissov’s GERB party. Investigations and a prosecution in connection with the “Kostinbrod affair”, which was eagerly promoted by media close to the now-departed ruling axis, came to nothing.

He described the hacker attacks as “not coincidental” and as “very strange”.

Plevneliev told the briefing that the disorder on the October 25 2015 election night and the days that followed showed how easier the process would be if Bulgarians were enabled to vote electronically.

He said that he hoped that politicians would not lose time unnecessarily in responding to the outcome of the referendum and would act responsibly.

Plevneliev sharply criticised what he described as the information blackout and lack of debate on the issue that was the question in the referendum.

He added that he had requested an investigation into who at the Central Election Commission had given instructions for voters not to be given ballots to vote in the referendum.

This was a reference to voters in the October 25 vote, a simultaneous municipal election and referendum, initially only being given ballot papers for the municipal vote.

Going by the CEC announcement of results, it has become clear that voter turnout in the municipal elections was notably higher than in the referendum – a fact that critics see as alleged sabotage of the referendum. 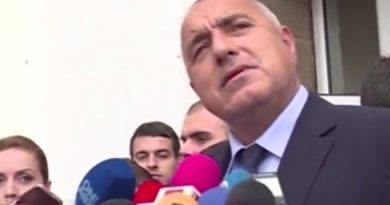