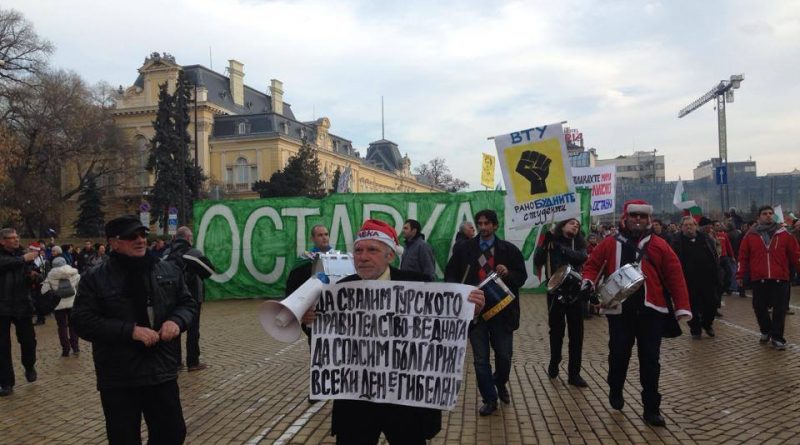 Home for the holidays, Bulgarian expatriates and students studying abroad joined in the “Resignation at Christmas” anti-government protest on December 26 2013 in Sofia and a number of other cities.

In the Bulgarian capital, the protest began in two phases, one beginning at Eagle Bridge and the other an hour later outside the headquarters of Bulgarian National Bank. After the groups merged, the protesters, underlining their continuing demand for the resignation of the Bulgarian Socialist Party government and fresh parliamentary elections, demonstrated outside the Cabinet office and Parliament.

After the groups united, reporters at the scene estimated to be more than 1500. This figure increased later, to past the 3000 mark. The street from Sofia University to the Cabinet office was closed to vehicle traffic.

There was a large police presence, with additional police staffing the heavy barricades outside Parliament when young people joining in kicking the metal barriers.  Firecrackers were thrown at the Parliament building.

Unconfirmed reports said that a young woman and a young man were detained and taken to a police station.

People from other cities joined the protests in Sofia, while protests were held in, among other places, Plovdiv, Varna and Bourgas.

In the capital, the protest began to thin at about 6.30pm, about four and a half hours after it started, with police moving the crowd back to open the road in front of the legislature to traffic.