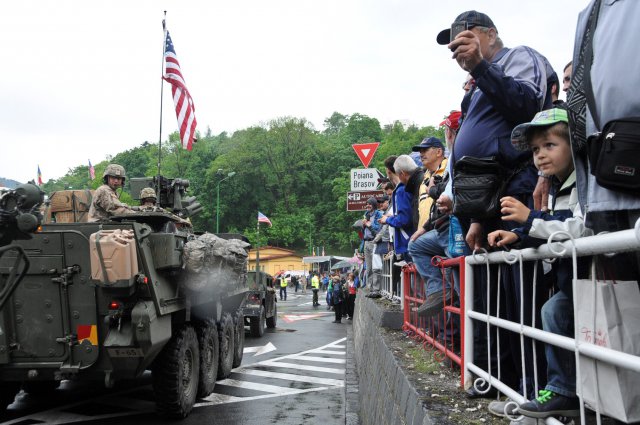 Amid increased Russian aggression in Ukraine, the U.S. Army needed a fresh way to reassure its eastern European allies.

The men and women of the Army’s 2nd Stryker Cavalry Regiment had the answer.

They successfully moved two convoys of hundreds of soldiers and tons of weapons across thousands of kilometers of NATO countries near Russia’s reach. A third convoy of Strykers — the eight-wheeled armored vehicles that give the regiment its name — is planned for September or October.

The convoys are more than just a series of exercises; they’re a message to Russia to stay out of NATO countries, according to Heather Conley, the director of the Europe Program at the Center for Strategic and International Studies.

“We’re sending the message: Don’t do it, don’t even think about doing it,” she said.

In March, the soldiers of 2nd Stryker drove weapons and other equipment 2,200 kilometers through Estonia, Latvia, Lithuania, Poland, the Czech Republic and Germany. The troops were met by cheering locals waving American flags in town after town.

“They are concerned [about Russia],” Colonel John Meyer, the leader of the regiment, said of locals in the region. “They watched what happened in Crimea. They watch what’s happening in the Ukraine.”

President Barack Obama and other global leaders have said Russia has broken international law with its military intervention in Ukraine.

“We have a country that has violated the territorial integrity not just of one country — Ukraine — but of Georgia. One could argue in Moldova as well,” Conley said.

In May, the team’s second convoy crossed through Romania, starting south at Mihail Kogalniceanu and ending in Ploiesti.

During the regiment’s third march this fall, the soldiers will travel from Germany through Hungary, where they plan to conduct a river crossing with Hungarian troops during two months of training there.

The road marches provide a visual example of NATO’s ability to protect member states from threats, according to Meyer.

Greek banks to open next week