A series of spectacular fatal accidents, most fuelled by speeding and drink-driving and often with young drivers at the wheel, have pushed dangerous driving in Bulgaria back to the top of the national agenda.

Prime Minister Boiko Borissov is among those who have spoken out on the issue, calling on May 11 for what a government media statement called “a war” on dangerous drivers.

“If you see such a driver, make a phone call, and notify [the authorities],” Borissov said, adding that this could save lives.

“We cannot place speed bumps and traffic police patrol cars at every corner,” he said.

People should call traffic police instead of just accepting dangerous driving. “These victims are the people who have yet to live, work. This is a heavy loss for the country,” Borissov said.

His remarks came at a time that some of the country’s major media joined in a public campaign against dangerous driving, and after a series of disturbing media reports about fatal motor accidents.

On May 12, Traffic Police head Stoicho Konstantinov told public radio that 217 people had died in accidents since the beginning of the year.

He said that reasons for the accidents included the removal of speed cameras, speeding and overtaking where it was not safe to do so.

Traffic police have said that they would deploy additional staff during Bulgaria’s high school prom season, while control on routes to the seaside and holiday complexes would be stepped up this summer.

Elena Grudleva, regional co-ordinator in Plovdiv of the Bulgarian Association of Accident Victims, told Darik Radio on May 13, “In Bulgaria, we love to have rules, but they are there to apply to others, not to us”.

She said that the collection of fines happened at a higher rate, as well as the effective imposition of punishments on guilty drivers, there could be a significant reduction in road fatalities.

Meanwhile, Bulgarian-language media reports on May 12, quoting Vladimir Todorov, head of the Bulgarian Association of Accident Victims, said that 25 per cent of accidents in the country were caused by new motorists.

Further, “fake companies” were issuing certificates of driving lessons after 10 hours of lessons instead of the 31 hours required by law.

Public broadcaster Bulgarian National Television and mass-circulation daily 24 Chassa joined in a campaign announced on May 12, including encouraging their viewers and readers to report driving offences to the police, by calling emergency number 112 or by making video recordings of reckless drivers and sending them to the television station’s email address, [email protected]

The campaign is also encouraging people to deter their relatives and friends from getting behind the wheel when they are drunk.

As part of the campaign, a report from the village of Malorad exposed widespread drink-driving and driving without a licence. This was shown as lawlessness typical for parts of the country where traffic police do not have the numbers to deploy staff.

Driving instructors held a national meeting on May 13 to discuss the improvement of traffic safety before the summer season and the training of young drivers.

Among issues raised was coming up with proposals for amendments to legislation and reviewing the questions put to candidate drivers in tests.

Krassimir Georgiev, of the Association for Qualification of Motorists, said that safety “starts and ends” with training.

He said that the association would draft a comprehensive strategy and an emergency programme with several elements, from improving the road infrastructure to other reforms.

He said that a huge number of mobile cameras would bring no real benefit.

“There are no mobile cameras in some other European countries, but in contrast, they have an effective control system,” Georgiev said.

A continuing part of the narrative of dangerous driving in Bulgaria has been the posting online of videos of driving at immense speeds. One recent example was of a motorist driving on a road from Sofia to Plovdiv at 330km/h.

Even as such videos went viral and were replayed on national television stations, and even as in some cases the identities of the drivers became public, prosecutors and police told the media that there was no way for them to take action, because such videos were not admissible in court.

Road deaths in Bulgaria in 2014 expected to exceed 600

Road death rate in Bulgaria drops, but remains much higher than EU average 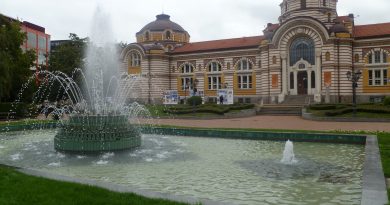