Bulgarians support and want reforms, President Rossen Plevneliev said in his New Year’s Eve address, saying that politicians should resolve crises and not aggravate them.

“Natural disasters and accidents hit us – innocent people died, thousands lost their homes. However, we did not remain indifferent to the pain of our compatriots who were in trouble.”

People had given the little money they had to show their commitment to those struck by disasters and in need of help, and to the refugees.

“The hand lent at times of hardship is a sign of humanness and the maturity of a society,” Plevneliev said.

“We took up the causes of the volunteers and the contributors as our own personal cause. The volunteers became a symbol of compassion and the commitment to the Bulgarian people. Their deeds are a manifestation of the strength of our unity.”

Plevneliev said that at difficult times for the country, it was particularly important to adhere to the high principles of patriotism and morality, and to the moral and spiritual values and traditions.

“We should show concern for the individual, because it is their victory, not the victory of any party or personality that matters. We should work so as to give all Bulgarians hope and more causes for pride.  We should restore their confidence that we are on the right track. We should strive to achieve a better and more worthy life.”

Unfortunately, many Bulgarians were living below the poverty line, he said.

The elderly, who receive small pensions, the underprivileged, the hundreds of thousands of unemployed and families that have to cope with difficulties with minimal incomes – all of them deservedly expect that the state should show solidarity and support, Plevneliev said.

“We should not mistakenly believe that we can promptly and easily achieve a high standard of living, particularly during a global crisis.

“However, if we fail to take measures to improve the business environment, to encourage investments and entrepreneurship, and to ensure education and learning, modernisation and efficiency, good management of the public resources, we will fall behind even more,” he said.

“We want democracy and the sovereignty of law and rules for everyone. However, to guarantee that we are all advancing, there should be functioning state institutions.”

This required political courage and reforms to ensure growth, and provide decent pensions and incomes, to support the socially-responsible economy, not the oligarchy, and set up efficient institutions.

“Refusing to implement reforms and displaying a spirit of revenge directly leads to long-lasting instability. The past two years in which we have had five governments and three parliaments prove this assumption,” Plevneliev said.

The politicians should show strong common sense and adopt a nationally-responsible approach in order to meet public expectations for increased stability and development, Plevneliev said.

Politicians should prove that they serve the public interest and work to promote public welfare.

“Politicians should resolve crises, not aggravate them. They should seek consensus on and meet the national priorities. The only way ahead is to solve our problems, not postpone resolving them.”

The state should aim to ensure the progress of everyone and prosperity by people working honestly and pooling efforts.

“It is important that as a society we develop and prosper together, observing rules, not at the expense of anyone else. We should never forget that democracy is not an aim to be achieved, but a process of constant adherence to principles and values.”

Plevneliev said that hopefully the New Year will be a better one for all, that people would feel that progress was being made made.

“The active civil society, which has adopted a clear democratic stance, is a guarantee for success and gives us the assurance to look ahead with hope.”

He said people were aware of the situation the state is in.

“Public support is secured and reforms are expected to be implemented. Inactivity at times of crises is dangerous and unacceptable. Difficulties should unite us and further mobilise us.

“Volunteers and contributors, the young and the enterprising, the active citizens showed us the right path, imbued optimism and proved that if we pool efforts, we can succeed,” Plevnliev said. 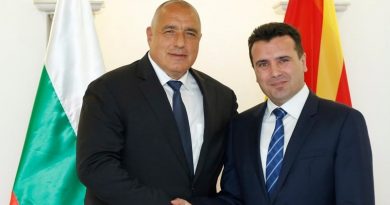