Controversial changes to Bulgaria’s pension system, although approved by Parliament, appear set for a rethink against a background of severe tensions over the changes within the ruling coalition and continuing objections from other political forces, business associations and civil society.

On December 19, Bulgaria’s National Assembly approved the amendments, which give anyone born after December 31 1959 a one-off choice to switch from their private pension fund to the National Social Security Institute (NSSI).

The bill was approved with 120 votes in favour, mainly from GERB and opposition Movement for Rights and Freedoms, with 57 votes against, including from GERB’s partners in the ruling coalition, the centre-right Reformist Bloc. A total 35 MPs, mainly from the opposition socialists, abstained.

The amendments were discussed at a meeting between GERB and trade unions on December 14 and debated in the budget committee earlier last week. Both Prime Minister Boiko Borissov and Finance Minister Vladislav Goranov, whom some media reports identified as the author of the bill, defended the amendments as giving Bulgarians more choice – whether to stay with private pension funds or opt for the state-run NSSI.

But talks between Borissov and Reformist Bloc parliamentary group co-leader Radan Kanev produced an agreement that the cabinet would for now not adopt an ordinance on the mechanism for people to transfer their pension benefits to the NSSI, pending a “general political decision by the ruling parties and the majority”.

Goranov also has been quoted as saying that the amendments would be redrafted.

Bulgarian head of state President Rossen Plevneliev, among those who has expressed misgivings about the changes to the system, saying that such changes should not be made piecemeal or with undue haste, nevertheless said after Parliament approved the amendments that he would not veto them.

The bill was passed in Parliament to the accompaniment outside the building of hundreds of protesters who see the move as, in effect, nationalisation of supplementary pensions.

The opposition Bulgarian Socialist Party said on December 21 that it was considering challenging the amendments in the Constitutional Court.

On December 22, the Protest Network, which was formed in 2013 amid the public protests demanding the resignation of the then-government following the abortive appointment of controversial figure Delyan Peevski as head of the State Agency for National Security, voiced its strong disagreement with the changes to the pension system.

The Protest Network said that the way that the changes were approved, without prior discussion and over the disagreement of a number of bodies, was an arrogant show of force and neglect of dissenting opinion.

The government had broken its promises about transparency and citizen participation in important decisions, the network said.

Goranov should resign and the government should initiate discussions on pension reform, with these discussions at two levels, public and expert. Should this not happen, along with the withdrawal of the amendments that Parliament had approved, the Protest Network said that it would consider calling for the resignation of the government as a whole. 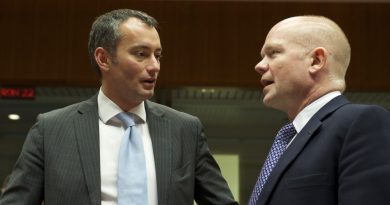