The process of seeking to come up with a government after Bulgaria’s October 5 early parliamentary elections still has some way to go.

Head of state President Rossen Plevneliev’s office said that he would on October 31 begin the process, as required by the constitution, of holding formal consultations with each party elected to Parliament.

Plevneliev will meet each party or coalition individually, working from smallest to largest.

The two smallest parties are Georgi Purvanov’s ABC, the parliamentary group of which is led by Ivailo Kalfin, and Volen Siderov’s ultra-nationalists Ataka. Each has 11 MPs but ABC got a smaller percentage of the vote, so it will be first on Plevneliev’s list.

Given Siderov’s recent stunts of boycotting events in the consultation process, it is not certain whether he would come to a formal meeting with Plevneliev, or at least remain at it after creating a customary melodrama.

According to the President’s office, it is envisaged that meetings would be held with two parties a day, meaning that the final consultation would be with GERB on November 5.

Once these formal consultations are finished, the next step will be for Plevneliev to offer a mandate to the prime minister-designate of the largest party, GERB’s Boiko Borissov, to seek to form a government. This is expected to happen on November 6.

On October 29, the process of encounters among political parties, initiated by GERB, was continuing.

The previous day, Borissov said that it seemed that the only option open to him was to seek to form a minority government including GERB and the centre-right Reformist Bloc, with floating support on issues from other parties.

But the Reformist Bloc responded that it wanted a tripartite majority government that included the nationalist Patriotic Front.

Most MPs, on entering the National Assembly building for the October 29 sitting, were reluctant to be drawn on the process of trying to form a government.

Reformist Bloc parliamentary group co-leader Radan Kanev, who the night before had a discussion with GERB’s Tomislav Donchev and Roumyana Buchvarova, expressed hope about a trilateral meeting involving GERB, the Reformist Bloc and the Patriotic Front.

“I hope that the Reformist Bloc can be the agent that can organise a majority in Parliament,” Kanev said.

The reports said that GERB had wanted a trilateral meeting, but the Reformists got in ahead of them and invited the Patriotic Front on their own.

Borissov, hurrying into the parliamentary building, brushed past reporters with no more than a laconic, “every day we negotiate”.

(Photo of Borissov and Plevneliev: president.bg) 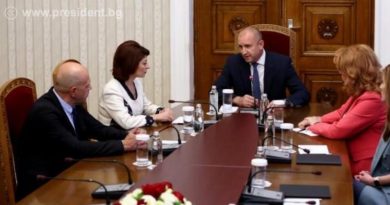 Bulgaria: Delays in consultations push back start of bids to form government