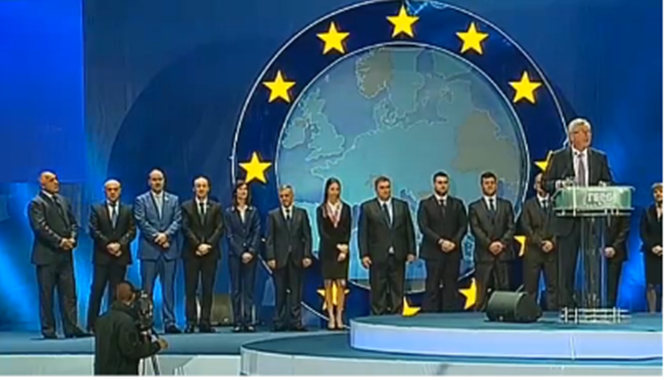 Bulgaria’s centre-right former ruling party GERB has 17.6 per cent and the Bulgarian Socialist Party (BSP) 15.9 per cent of voter support ahead of the country’s European Parliament elections on May 25 2014, according to the results of a public opinion survey by Alpha Research released on April 29.

GERB still had some minor potential to garner further support while the BSP had achieved close to the maximum mobilisation of its electorate, according to Alpha Research, arguably the most reliable among Bulgaria’s polling agencies.

Of the 15 parties and six coalitions registered for the May 25 vote, there was just one other party reasonably assured of getting some of the 17 MEP seats allocated to Bulgarian in the new European Parliament, the Movement for Rights and Freedoms, with 6.2 per cent.

Three other parties and coalitions had some chance: Bulgaria Without Censorship (BWC), a populist party that has recruited a small number of minor extra-parliamentary parties in its campaign on a ticket headed by BWC leader Nikolai Barekov (4.9 per cent); the Reformist Bloc, an alliance of a number of right-wing and centrist parties currently with no seats in the National Assembly (4.5 per cent); and socialist ABC, the movement led by Georgi Purvanov, which has Ivailo Kalfin heading a ticket set up in opposition to the current BSP leadership.

In the past month, BWC had shed some support, ABC had recovered very slightly from previous losses while support for the Reformist Bloc was stable, if not growing sufficiently to be sure that it could win a place in the European Parliament.

The fourth party currently represented in the National Assembly, Volen Siderov’s far-right ultra-nationalists Ataka, had practically no chance of a seat. At 2.5 per cent, it was behind its rival in the same political gene pool, the National Front for the Salvation of Bulgaria.

In effect, Ataka is among the remaining parties with no chance in Bulgaria’s European Parliament elections, going by the Alpha Research poll.

The polling agency found a revitalisation of the negative attitude among Bulgarians towards the ruling axis, in power since May 2013 after second-ranked BSP was handed a mandate to govern, and formed an administration in effective partnership with the MRF and with the tacit support of Ataka.

While public attitudes had been relatively stable for the past three months – against a background of months of profound unpopularity of the government, which has faced months of protests demanding its resignation – the share of optimists in Bulgaria that believed that the situation was improving dropped from 20 per cent to 13 per cent, while 58 per cent saw the situation in the country as worsening.

Alpha Research found that discontent was pervasive across the board of all social strata in Bulgaria, including those who had supported the cabinet and the ruling coalition.

Confidence in state institutions continued to erode, with positive assessment of the cabinet dropping from 19 to 17 per cent while the negative view increased to 56 per cent.

The approval rating of Plamen Oresharski, who was appointed in May to sit in the prime minister’s chair in the BSP cabinet, decreased in the past month from 25 per cent to 22 per cent.

Confidence in the 42nd National Assembly, Bulgaria’s unicameral Parliament, remained at the strikingly low level of eight per cent.

Approval also had dropped of the otherwise most popular public figures, President Rossen Plevneliev and Prosecutor-General Sotir Tsatsarov. The positive rating of head of state Plevneliev fell from 27 to 23 per cent, while Tsatsarov’s approval rating slid from 26 to 25 per cent.