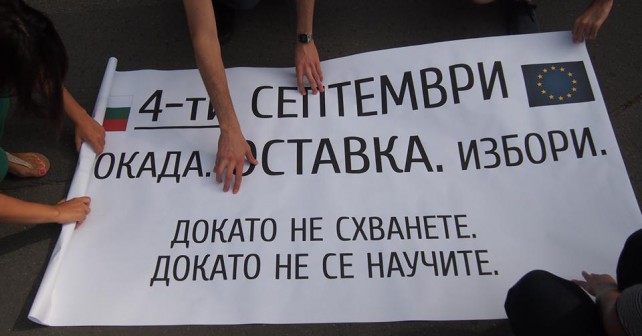 The two days before Bulgaria’s Unification Day long weekend are set to see mass protests against the government as Parliament resumes on September 4, while the following day Plamen Oresharski, occupant of the prime minister’s chair in the Bulgarian Socialist Party government, is to report on the 100 days of the government.

The anti-government Protest Network has issued an appeal for people to support the event themed “100-3-5” on September 4, a reference to 100 days of the government, the three elements of the message that the anti-government protesters intend delivering, and a call for each protester to invite five friends to accompany them.

The protesters’ threefold message to the government is to resign immediately, for new parliamentary elections to be held before the end of 2013 and for new governance of decent, honest and competent people (you do not have any of the three, the message says), and calls for an “Operation Clean Hands” to remove all links between the government and the mafia.

Anti-government protesters intend gathering outside the National Assembly in Sofia at 8am on September 4, before MPs arrive for the resumption of parliamentary sittings after the summer recess.

It will be the 83rd consecutive day of anti-government protests. Protesters have again underlined that they have no commitment to any political party but are on the streets to campaign against the “mafia-oligarchic model” and all the ills of Bulgaria’s political system.

According to public broadcaster Bulgarian National Television, anti-government protesters were reminded by organisers to continue to behave peacefully, but to expect “provocations”.

Earlier reports said that pro-government protesters – who only once in recent months have mustered numbers of any significance, when people were bussed in for the special debate on overturning the presidential veto of budget 2013 amendments – also intended to be outside Parliament on September 4, although their usual stamping ground is outside the National Palace of Culture, NDK, and the office of the President, whose resignation they demand.

Boiko Borissov’s centre-right GERB party, which by degrees has been backing down on its boycott of the 42nd National Assembly that was elected in May, on September 2 associated itself with the call for mass protests against the government on September 4.

“We accept the appeal for the immediate resignation of the Government and declare ourselves for new elections by the year’s end. We join the appeal that every citizen and every party demanding the government’s resignation and prompt elections should join the protest action already on September 4. The more people go in the streets these days, the faster the government would go,” GERB said.

Also associating itself with the call for mass anti-government protests on September 4 was Meglena Kouneva’s Bulgaria of Citizens Movement, which in May fell short of the threshold for seats in Parliament and which has joined a number of other minority extra-parliamentary parties in the Reformist Bloc.

Kouneva’s party called on people to join the protests against the parties in power, which in recent months had shown that their statements had no weight and in which “ideological opponents” entered into backstage deals to retain power at all costs.

“We believe that Bulgaria needs a new political order, and urge the government, if they want to keep their own dignity and the dignity of the nation, to listen to the voice of the Bulgarian citizens,” the party said.

BNT said on September 3 that Oresharski would report on September 5 on the 100 days in office of the government. This report would list “31 steps taken by the government for the poor and families” and outline further payments by the state of debts owed to companies and a commitment to end the practice of delays in VAT reimbursements.

The BSP continues to insist that it will not step down in the face of the anti-government protests.

Speaking this past weekend, socialist Speaker of Parliament Mihail Mikov denied reports that the party had “secret deals” with GERB about early elections and denied that there was any reason to hold early elections.

“We have a lot of tasks for the autumn, and people will give their assessment of the Cabinet’s performance next year at the European elections,” Mikov told mass-circulation 24 Chassa.

Speaking to pro-government Presa, BSP MP Maya Manolova – a figure favoured for ridicule by protesters, and who recently derided anti-government protests as “a form of temporary employment”, a reference to unproven allegations that protesters are paid – said that her advice to the government was for the Cabinet to “talk more about its successes”. She said that “Oresharski and his ministers have done enormous work, but are not yet able to explain this to people”.