The head of Bulgaria’s State Energy and Water Regulatory Commission (SEWRC), Anzhela Toneva, submitted her resignation late on December 10, and will be replaced by Boyan Boev.

Toneva resigned because of “tension in the energy sector” but had not been pressured into resignation, public broadcaster Bulgarian National Television said.

Prime Minister Plamen Oresharski declined to comment on the issue when asked during a news conference following his meeting with Serbian prime minister Ivica Dacic in Sofia on December 11, news agency Focus reported.

Later in the day, at its weekly meeting, the Cabinet decided to appoint Boev as Toneva’s successor. Boev was previously executive director of Bulgarian Energy Holding (BEH), the parent company of the largest state enterprises in the energy sector.

Boev has masters degrees in economics and accounting, the Government’s media service said. He will serve the remainder of the current term as SEWRC chairperson, which expires in September 2014.

Toneva’s resignation comes shortly after Economy and Energy Minister Dragomir Stoynev has started pushing for another electricity price cut, news website Mediapool.bg said. Bulgaria has already cut prices twice this year, in the wake of protests against electricity bills last winter, despite warnings from the industry that this would undermine the financial stability of the energy sector, the report said.

The resignation sparked a flurry of comments in Parliament on December 11. MP Delyan Dobrev, who was economy and energy minister in the Boiko Borissov cabinet until its resignation in February, said that he believed Toneva opposed the latest electricity price cuts in August and resigned in order to avoid being made the scapegoat for the failing financial health of the energy sector.

Socialist MP Yavor Kouyumdjiev, the deputy chair of Parliament’s energy committee, said that the resignation would not cause any disturbance in the regulator’s work because it was not scheduled to make any price rulings in the immediate future.

Ultra-nationalist party Ataka – which set its sights on the nationalisation of the energy sector in its election platform earlier this year, calling privately-owned foreign companies “colonial occupants” – said that Toneva’s resignation was the result of the influence of “shady lobbies in Bulgaria’s energy sector” that sought to “destabilise the state” during the cold winter months.

Toneva was the fourth person to hold the position of SEWRC chairperson in 2013, with the three leadership changes coming in quick succession over a period of five months, at a time when Bulgaria has seen tens of thousands of people march in protest rallies against high electricity prices and a spike in electricity bills in January.

The protests came shortly after then-prime minister Boiko Borissov sacked Angel Semerdjiev because of poor progress in drafting administrative regulations related to EU’s Third energy package. At the height of the February protests, Borissov appointed Yuliana Ivanova to the vacant position, but she resigned only days later when it emerged that a company she owned had been illicitly trading online in cigarettes.

Ivanova served as acting chairperson until March, when Borissov appointed deputy economy minister and former SEWRC member Evgenia Haritonova to the position. Haritonova, however, resigned on June 5 and was swiftly replaced by Toneva.

A member of SEWRC since 2009, Toneva had been employed by the regulator since 2001, including as an expert and then as department head.

Toneva was not the only member of the regulator to submit her resignation, with Mihail Dimitrov – appointed to a five-year term in June – resigning on December 11. Dimitrov will be replaced by Lilyana Mladenova, who had been employed by the regulator until August, when she became the head of the price formation department at BEH. 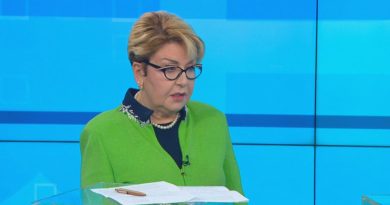