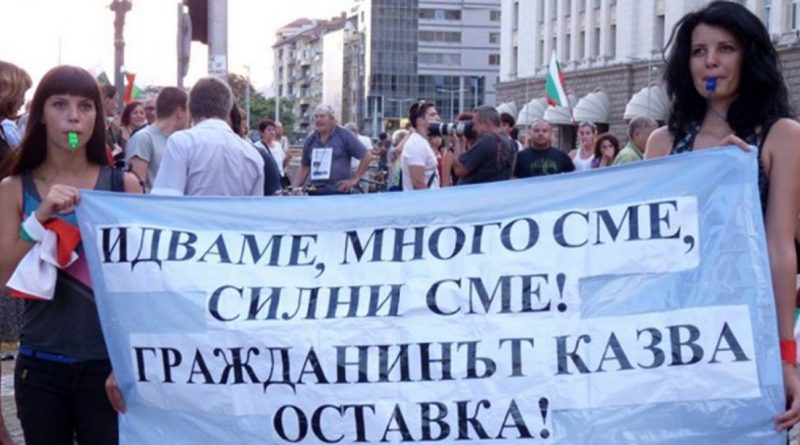 Bulgarian capital city Sofia was set for a day of drama on November 20, with plans for sundry protests and national political events.

The “Early Rising Students”, the anti-government university student group that is demanding the resignation of the current Bulgarian Socialist Party group and sweeping reforms to the country’s political system, had scheduled a protest beginning at 11am outside the National Assembly building.

Parliament is scheduled to begin its November 20 sitting at 9am.

The anti-government protest on November 20 comes against a background of the latest opinion poll showing that public confidence in the current BSP government has sunk even lower. A previous poll by another agency showed the approval rating of the government at a record low, and approval ratings of individual ministers so low as to register, in 11 out of 17 cases, percentages of less than zero.

The university students’ anti-government protest group, which recently transformed its “Occupy” protest to a continuation of the occupation of the central part of the building of the main university campus while allowing lectures to resume, called for a strong turnout of all those who wanted to take a moral stance on the wrongness of Bulgaria’s domestic politics.

One of Bulgaria’s trade union bodies, the Confederation of Independent Trade Unions of Bulgaria, announced a protest rally which is scheduled to reach the Cabinet office by noon and the National Assembly building by 12.30pm.

A day ahead of the rally, the confederation sent a list of demands to the Speaker of Parliament and other parliamentary office-bearers.

These demands include reforms to the taxation system, legislative proposals to ensure timely payment of salaries, pension and health system reforms, the urgent drafting of a five-year plan to rescue Bulgaria’s severely troubled energy system, guarantees on basic civil rights including union rights such as collective bargaining and urgent adoption of anti-trust legilsation including “civil control” of the activities of all supervisory and regulatory bodies in Bulgaria, as well as protection of the interests and rights of producers and consumers.

Taxi drivers also have scheduled a protest, with taxi drivers from Sofia being joined by their counterparts from Plovdiv in the capital city, to demand changes to rules and regulations governing the industry. Among demands is that the age of cars permissible for use as taxis be extended from 10 to 15 years, as well as a minimum tariffs applicable to all taxi firms.

The Bulgarian Socialist Party cabinet is due to begin a sitting at 10am, but several of its number will be attending the special sitting of the Consultative Council on National Security, called by head of state President Rossen Plevneliev for 2pm.

The Consultative Council on National Security, by law convened by the head of state, brings together the head of government, ministers and other top officials with security, intelligence and other strategic portfolios, as well as the leaders of the parties with seats in the National Assembly – in this case, GERB leader Boiko Borissov, BSP leader Sergei Stanishev, Movement for Rights and Freedoms leader Lyutvi Mestan and Ataka leader Volen Siderov.

The theme of the November 20 meeting is “current risks and threats to the national security of the Republic of Bulgaria – the state of the security environment : organizational , functional and resource capability of the counter- current risks and threats. Measures taken in accordance with the changes in the security environment and their financial security”.

Those who have been requested to present reports on the topic include Interior Minister Tsvetlin Yovchev, State Agency for National Security head Vladimir Pisanchev and the head of the National Intelligence Service, Dragomir Dimitrov.

A customarily lesser show on November 20 will be the little band that gathers weekdays outside the Presidency in support of the current BSP government, who usually also call on Plevneliev to resign.