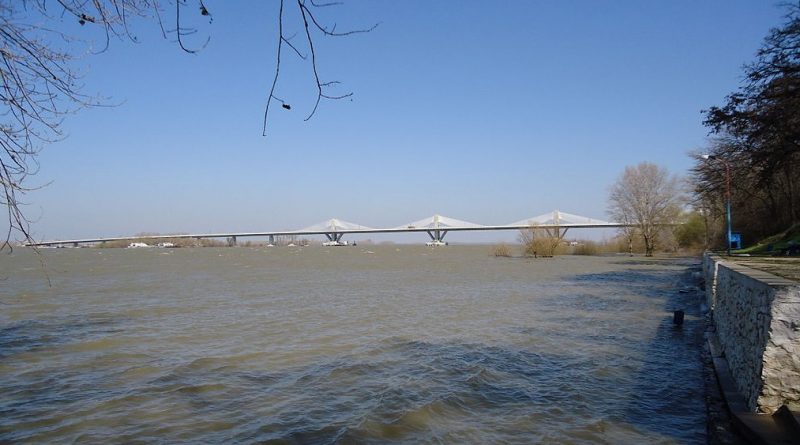 Senior government officials from Bulgaria and Romania, including the two heads of government, and European Commissioner for regional policy Johannes Hahn attended on June 14 the official opening of the bridge over the Danube River between Vidin and Calafat.

Bulgarian President Rossen Plevneliev, who was due to attend as well, cancelled his participation in protest against Parliament’s election of Delyan Peevski as the new head of the State Agency for National Security earlier in the day (as reported by The Sofia Globe here).

In remarks published in advance of the ceremony, Hahn described the new bridge as “a powerful symbol of EU regional policy connecting communities and creating vital business links.”

“I am confident that the collaboration between Romania and Bulgaria – which we have helped foster through the Danube Strategy and which has made this project possible, will create the incentive for more connections, and will benefit both countries hugely,” he said.

EU funding for the bridge and related infrastructure stood at 106 million euro, out of 282 million euro spent by the two countries.

Although the idea to build a second bridge over the Danube between Bulgaria and Romania dates back decades, neither country could afford to foot the bill as their economies dealt with the ramifications of transitioning from state control to free market principles during 1990s.

After the EU agreed to fund the project, construction began in 2007, but quickly ran behind schedule. The European Commission agreed to extend the deadline by one year so that the two countries would not lose the EU grants.

However, several hundred local residents gathered at the bridge hours before the opening to protest against the poor state of other roads in the Vidin district leading to the bridge, local news agency Focus reported. The constant repairs on E-79 motorway between Sofia and Vidin made it difficult for the bridge to be used to its full potential, according to the report.

Transport Minister Papazov, however, was confident in an interview with Bulgarian National Radio earlier on June 14. Papazov said that more than 415 000 vehicles were expected to use the bridge in the first 12 months of operation, with revenue from transit fees forecast at four million leva for 2013.